The New Zealand Air Force is often called on to deliver supplies into disaster zones, or even Covid-19 tests on to ships waiting to berth in New Zealand. 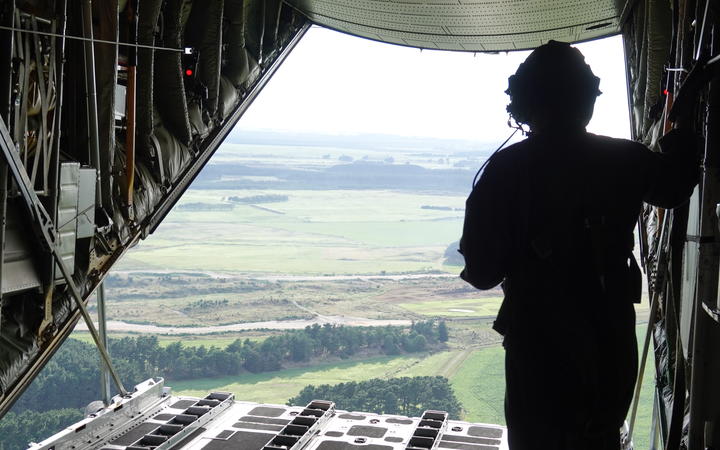 Low-flying exercises and parachute drops were taking place into a target zone at Ōhakea air base on Wednesday. Drop-offs are made only 250-300m above the ground. Photo: RNZ / Jimmy Ellingham

When its aircraft can’t land, precision skill and timing are a must as it drops its deliveries from the sky.

To hone those skills the Whenuapai-based 40 Squadron is spending a fortnight at Ōhakea air base in Manawatū for Exercise Skytrain.

On Wednesday morning low-flying exercises and parachute drops were taking place into a target zone at the air base.

The Air Force could be called at any time to drop supplies into war zones or after disaster strikes, when landing and unloading are impossible.

It even drops mail and Christmas presents to Department of Conservation workers on the remote Raoul Island in the Pacific Ocean.

One of the Hercules involved in the training excercise. Photo: RNZ / Jimmy Ellingham

Detachment Commander Matt Rieper said Wednesday morning’s exercise involved a Hercules flying low in a large circuit around the greater Manawatū, before dropping equipment to a target on the ground at Ōhakea.

Two Hercules, out of New Zealand’s five, are involved in the operation. The one flying on Wednesday morning has been in service since 1965.

The aircraft are due to be replaced with an updated model in 2025.

During the exercises, different scenarios are at play to simulate threats or changing situations during deployments.

“We’re training to prepare the crew and all the supporting elements for tactical flying in a low- to medium-air threat environment,” Rieper said.

“We have done aerial deliveries to ships that have been in trouble. 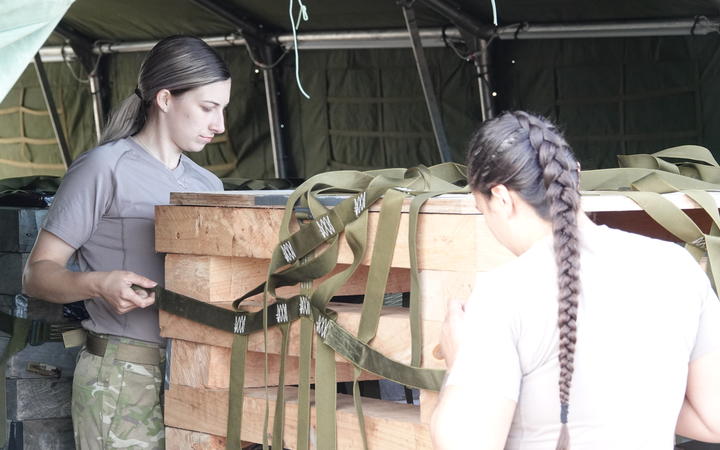 Army personnel rig together supplies to be dropped from aircraft during the training exercise. Photo: RNZ / Jimmy Ellingham

If possible, though, it was preferable to find somewhere to land.

“It’s rare that you can’t find somewhere decent to land.”

Later in the year the Air Force plans to do more training exercises overseas. 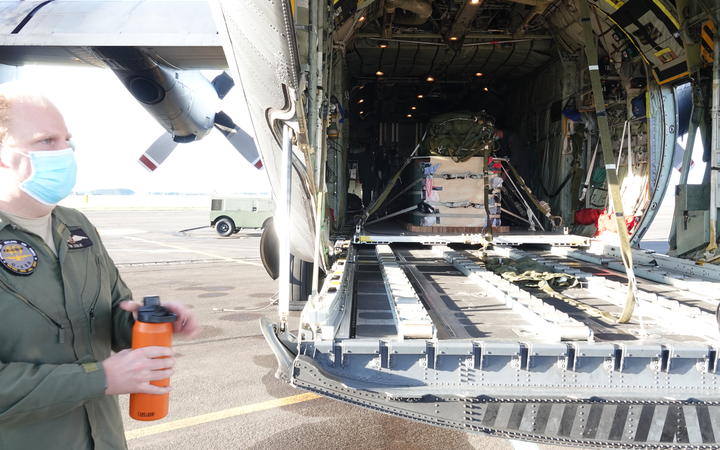 Tim Leslie prepares for a flight, with the supplies to be dropped in the aircraft. Photo: RNZ / Jimmy Ellingham

The army’s Linton-based 5 Movements Company is putting together the packages that fall to the ground.

Corporal Taanewai Te Uamairangi said it was a job that had to be done well, so they didn’t explode on impact.

“We’re just here to assist with all the rigging for the loads that need to be dropped out the back of the aircraft, whether it be water or food, rations, any stores….

“You can drop out water or fuel or anything really – anything that’s needed at the other end.”

RNZ accompanied one of the training flights.

After about 45 minutes in the air, the plane’s back doors open and we can see the Manawatū countryside gliding past about 250 metres below.

As we approach the drop zone, the aircraft is flying about 200km/h.

When it’s time, the load disappears quickly after the loadmasters check everything is ready. 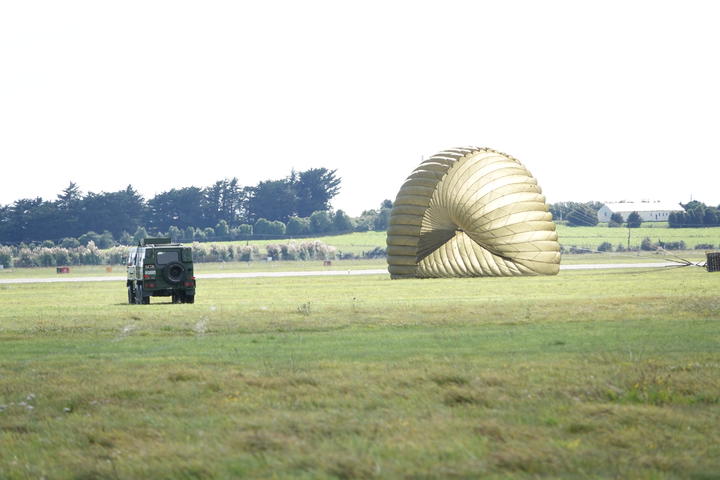 Supplies fall to the ground at Ōhakea air base. Photo: RNZ / Jimmy Ellingham

Co-pilot for the flight, Flight Lieutenant Andrew Sledger, said the load landed about 100m from its target, not a bad effort given the speeds involved.

He said the squadron tried to do similar training at least once a year, although Covid-19 had hampered that recently.

Sledger cited the aftermath of the Kaikōura earthquake in 2016 as one example of where supplies had to be dropped in by air, because roads were cut off and there was nowhere to land.

The person who made sure the supplies landed where they should was navigator, Flying Officer Carter Bland.

He had his first flight in the role on Tuesday. It went “not too bad for a first time”.

Covid-19 briefing: One third of cases in children and teens

Read More
Air Accident investigators are travelling to the West Coast today, to find out why a helicopter crashed. The…