A visitor from 66 million years ago – the first Tyrannosaurus rex skeleton to be displayed in Aotearoa – will be on show at Tāmaki Paenga Hira (Auckland War Memorial Museum) this month. 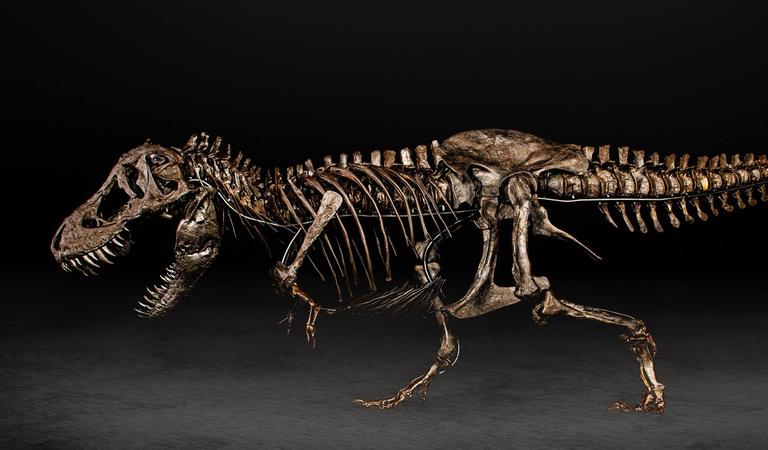 Museum-goers will have the chance to stand up close to one of history’s most notorious predators from 15 April.

The skeleton is from an adult T rex, and is set up in hunting position, 4m-high and 12m-long.

Museum spokesperson Timothy Hart said Peter met a grim end in life. His legs were gnawed on by something big.

“It looks like he was probably killed by another T rex, possibly a mother and a baby T rex, ’cause there’s evidence of feeding from a large animal and a smaller animal, but still a T rex.

“[They] can tell from the spacing of the teeth. So it looks like together they finished him off.”

Peter is one of about 32 adult T rex skeletons to ever be discovered.

The giant fossil is on display until 4 September, and alongside it the museum will run an immersive dinosaur performance, junior palaeontology programme and two other educational programmes on dinosaurs and fossils.

More dirt on Peter the dinosaur

Peter the T rex was found in 2018 in a fossil-rich area called the Lance formation, near Wyoming in the western United States.

Tyrannosaurus rex lived between 66 and 67 million years ago, paleontologists said in a report prepared about Peter’s skeleton.

That means his bones have been fossilised, and subject to tens of millions of years of erosion, compression and movement within the Rarth.

By bone density, Peter the T rex is 57 percent complete and is “one of the top 10 most complete T rex in the world,” said Dr David Burnham of the University of Kansas, one of the report’s authors.

“We are fortunate in having a significant number of Peter’s largest bones, many of which are incredibly well-preserved.”

Peter’s skeleton has a distinct special feature – it has taken on a black colour from organic material that surrounded it as it lay in the Earth.

“Peter is an incredibly rare and visually stunning obsidian black in colour,” said Dr John Nudds, of the University of Manchester, another of the report authors.

“Only four black T rex have ever been discovered.”

FFEATURED
We’ve detected unusual activity from your computer network To continue, please click the box below to let us…
FFEATURED