Auckland Transport is warning people they do not have a right to park on the road outside their house as they seek to change parking rules. 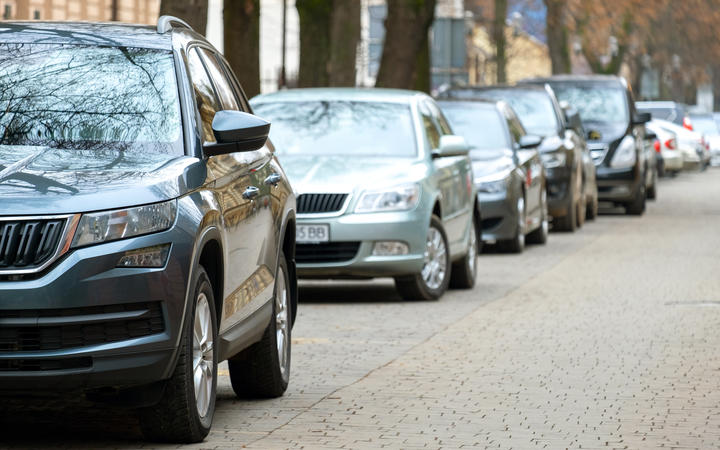 Under its new draft parking strategy, on-street parking on dozens of main roads could be taken away and fees for park-and rides facilities may be introduced.

In its place would be more public transport infrastructure, like footpaths, mobility spaces, bikes and bus lanes.

The public can provide feedback on the proposed parking strategy from 1 April until 1 May.

“Transport is all about the meeting of infinite need with finite space” – Auckland Transport head of integrated network planning Andrew McGill duration 7′ :30″
from Morning Report
Add to playlistPlaylist
Download

Auckland Transport head of integrated network planning Andrew McGill said they have done a network plan for Auckland identifying all the key roads for each mode of transport.

“Around 16 percent of the road space in Auckland is on that network and that’s the network that is really critical for moving people, goods and services, as opposed to being used for the storage of vehicles – so those are the roads that we’re going to focus on.”

McGill said the plan will be implemented in a staged roll-out over the next decade.

After establishing a region-wide strategy, Auckland Transport will consult publicly and with local boards to look at local parking plans for individual identified areas.

“Transport is all about the meeting of infinite need with finite space and we’ve got only two options around how we can cater for a growing city with our transport system.

“We can keep knocking down our buildings and widening our roads, which nobody likes, or we can optimise the space and by optimising the space it means focusing our movement corridors on the movement of people, as opposed to using them on our key roads for storing people’s private vehicles.”

Auckland Mayor Phil Goff called Auckland Transport’s initial plan “bloody arrogant” on the basis that it would have seen the organisation able to remove parking without public consultation, the NZ Herald reports.

However, McGill said on the basis of what the mayor and others have said Auckland Transport changed its position to include consultation through individual projects.

“But our starting point is very much that if we want Auckland to be a region that keeps moving into the future, we have to ensure that our roads are places where people are moving, as opposed to where cars are sitting.”

McGill said parking on a public street in front of your house is not a given right, as roads are critical public spaces which need “to provide the most benefit to the most Aucklanders”.

“You don’t have the presumption of a right to park in on a public space that other people might want to use to get places,” he said.

“If a single person parks a car on a lane, then that lane becomes unusable for people to travel.”

McGill said significant public transport increases will also be rolled out in the coming years.

“We’re going to be implementing the parking changes at the same time that we are implementing improvements to public transport services.”

He said that meant that people would not be left with nothing once their parking was removed.

Communities must be on board and have transport alternatives – councillor

Waitākere Ward councillor Linda Cooper said government plans for housing intensification had seen the removal of the provision to require parking for households.

“It begs the question, if we don’t have enough public transport and people still have to have more than one car in their family, where do they put their car?”

“People have got to be ready, they’ve got to have had these conversations in their families about ‘how many cars do we need?'” – Linda Cooper duration 3′ :49″
from Morning Report
Add to playlistPlaylist
Download

“People have got to be ready, they’ve got to have had these conversations in their families about ‘how many cars do we need?'” – Linda Cooper

Cooper said she would like a bespoke approach to removing car parks.

“You can’t do this until communities are ready, until the infrastructure [and public transport] is there.”

But she said housing development is being pushed out to the margins where there are not good rapid transit networks which are frequent, fast and reliable.

Cooper said it is vital that people affected by the changes have alternatives to cars and that they can rely on public transport.

Auckland Transport is also proposing to introduce fees for park-and-rides and estimates it may initially cost $2 to $4 per day.

McGill said park-and-ride is a valuable, premium service and it is great that people are using them.

“But also they cost millions of dollars to build and maintain and are on valuable land and what we need to do is to make sure the value of that product as a premium service is reflected.”

He said the park-and-ride fees will be set annually in the same way as fees are set for public transport.

“We’re going to be looking at whether we can provide discounts and incentives for people who park-and-ride as opposed to park and walk away, which some people are doing.”

McGill said people are paying for parking regardless.

“You can either have a situation where the ratepayers all pay via their rates, or we can move to a mixed model with user pays – so that just like with our public transport system, the ratepayers are subsidising the cost, but not fully.”

Read More
A man has pleaded guilty to the manslaughter of Fau Vake, a rising MMA fighter who was punched…
FFEATURED