Ardern says last week’s in principle decision to move Auckland to alert level 3, step 2, has been confirmed by Cabinet. The city will move to the new step from 11.59pm tomorrow.

Cabinet next week will announce a date for Auckland border changes, she says.

Under alert level 3, step 2, retail businesses and malls can be open, but event facilities like movie theatres and gyms remain closed for now.

Outdoor gathering limits increase to 25 people and the two-household restriction is removed.

Public facilities like libraries, museums and zoos can also reopen.

Ardern says increasingly high vaccination rates in Auckland is a substantial part of the decision today.

“While we’re getting those rates higher still, we are easing into our reopening. The restrictions we’ve eased to date we’ve done so because we know they are the safest ones, for example evidence shows picnics outside have not led to an increase in cases and from barbecues we have evidence of just one case.

“Keeping it outdoors reduces the risk and helps keep cases under control.”

She says we have also not seen significant numbers of cases in workplaces, so opening retail should also be low risk. 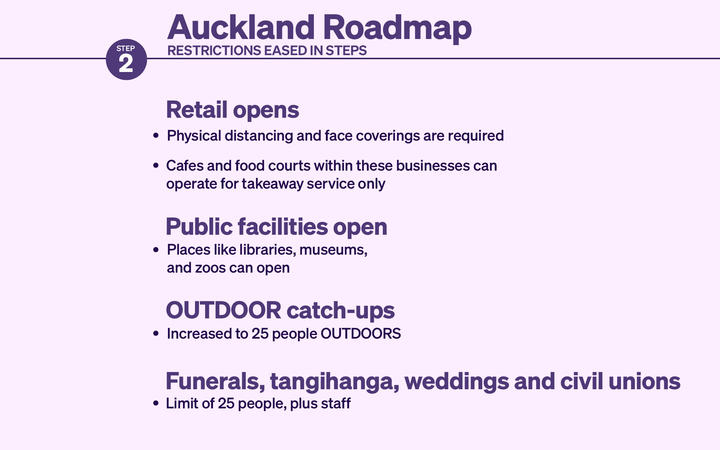 Upper Northland will move back to alert level 2 at 11.59pm Thursday, she says.

“We’ve seen very high testing rates in the far north, tripling in the last seven days and 10 to 15 percent of the population has been tested.”

She says there were additional cases today but the Director-General’s advice is more cases can be managed through contact tracing and testing.

Director-General of Health Dr Ashley Bloomfield says there is a six-week-old baby with Covid-19 in hospital in Whangārei.

There have also been some cases that came in since 9am in Kaikohe with links to people who had travelled there from Auckland. He says the most recent wastewater result in Kaikohe was negative.

Cabinet will next make alert level decisions on Monday 15 November when Waikato is due to be considered.

Some six DHBs have hit the 90 percent first dose mark, Ardern says, and only 33,316 doses are required across the remaining 14 DHBs to get them all to 90 percent.

“We have the capacity and vaccines to do all of those tomorrow,” Ardern says. She encourages anyone who has not yet had their first dose to do so.

Based on current projections Auckland is on track to reach 90 percent double vaccinated this month, Ardern says.

With the 29 November Cabinet meeting due to consider a shift to the traffic light system and based on discussions today, there is a “strong expectation” that Auckland will move to the new system after the 29 November check-in.

“Moving to the new framework at that time will mean certainty for Auckland. It will mean all businesses can be open and operate, it will mean we will manage Covid safely, but differently.”

If Auckland meets the 90 percent double vaccinated mark before the 29 November date, Auckland will move to the traffic light system. Ardern says they are looking to confirm the date that the border will change next week.

“It’s more than just whether or not Auckland has moved to the new framework … Auckland has worked so hard to get their vaccination rates high, they deserve to be able to move as soon as they hit those targets regardless of what is happening in the rest of the country.”

She says 29 November is about three weeks from when Auckland will have had the opportunity for the first doses to turn into second doses anyway.

She says daily cases will grow but this is not the only consideration, with hospitalisation and ICU usage becoming more important.

Asked about whether Auckland could move to the traffic light system if DHBs fall slightly short of 90 percent, Ardern says Cabinet will be very pragmatic about the decision at the 29 November check-in. “We are going to be very pragmatic … that’s a very very strong nod from us.”

Asked if the date is when Auckland can expect to move or it would be some days after the decision, Ardern says Cabinet is aware of the pressures in Auckland and will be looking to move quickly.

She says the government has committed to continue working through the three steps down from alert level 3.

She says with the new protection framework (the traffic lights), the days of uncertainty would be gone.

Medsafe has approved a booster dose of Pfizer vaccines for people aged over 18, at least six months after the second dose.

The next step is for the technical advisory group to inform ministers about this, Ardern says.

Bloomfield says the centralised process for medical exemptions for vaccines is in place from today.

Ardern says digital vaccine certificates are being trialled this week and there’s multiple versions that would be ready earlier but they are expected to be ready by 29 November.

Asked about changes to MIQ, Bloomfield says there is no doubt the risk profile from people who have been double vaccinated and had a pre-departure test is changing. However, the risk is not zero, as appears to be for people going to the supermarket.

Ardern says as the situation changes in New Zealand, MIQ needs to change – and it is. She says isolation at home increasingly makes sense, which is why that system is being trialled.

However, she says care is needed, and even with self-isolation 20,000 people returning to New Zealand could mean up to 20 cases being seeded into the community.

Bloomfield says the roughly 290 people isolating at home includes cases and contacts. He says the roughly 2000 classified as “other” are people who have come to the end of their MIQ or time in isolation, but the data has not been updated to reflect that, some are still in MIQ, and others are in hospital.

Bloomfield says there is pressure on the system for assessing people to isolate at home but resourcing is being steadily increased.

He says his sense is most people are getting contacted very quickly but there are some who are “probably waiting longer than we would like”.

Ardern says using at-home isolation was what was used at the beginning of the pandemic. She says that led to a number of outbreaks, “so we know we need to do better this time”.

Ardern says while the Ministry of Health has declined to share information for the whole of the North Island, it is working on other provisions of sharing information.

Bloomfield says the decision was not to provide data for all Māori in the North Island who were unvaccinated but instead to to work with the Whānau Ora commission agency and its providers to release data where it was helpful at a local level.

“We’ve reached out to the agency today and are getting in place a meeting for tomorrow on how we can do that starting with Hamilton and Kirikiriroa.”

He says they are processing requests for data in other areas.

Bloomfield says some iwi felt their data should not be shared, because they felt that would compromise their relationship with iwi and the Crown.

Auckland’s Māori population at 79 percent first dose and 63 percent fully vaccinated was “definitely not enough to loosen restrictions”, he said.

Meanwhile, by late last week one in five people in Northland was still unvaccinated and the region is near the bottom of the charts for vaccination rates.

Of the 190 community cases announced today, one was in Northland.