Home Calls for public transport discount to be extended
FFEATURED

The minister of transport has hinted that the government could extend the three-month discount on public transport tickets.

The half-price fares on public transport last until the end of June.

Friday was day one of the scheme which aims to boost dwindling passenger numbers and to soften the blow from the rising cost of living.

In Tāmaki Makaurau, early risers in Grafton were off to work using the bus but the discounted fare left them with change to spare.

“Yeah, that’s good ’cause I go out to South Auckland sometimes to see my sister so it does pay off,” said one passenger.

“I feel good about it, I could buy an extra coffee probably or something like that,” said another.

Another woman was not as convinced.

“Well, if we’re not paying full fare for the bus, we were either overcharged in the first place or the money we’re not paying on the bus is going to be spent somewhere else so I think it’s a trick.”

Some Wellingtonians were keen to swipe on more with a discount on offer.

“When I’m on the late shift, I’ll take public transport instead of a car,” said one person.

“Well, Massey [University] in particular is kind of doing all online at the moment, so it’s a bit of a shame a lot of students can’t take advantage of this half-price more for some of their classes, but I definitely plan to come in and out of town a lot more while it’s half-price, absolutely,” said another.

“We are open to considering what we do after that, and we’ll consider the options as we go forward” – Minister of Transport Michael Wood duration 5′ :32″
Add to playlistPlaylist
Download

“We are open to considering what we do after that, and we’ll consider the options as we go forward” – Minister of Transport Michael Wood

Checkpoint crunched the numbers ourselves to see if the discount had made a difference to passenger numbers and hopped on board a commuter from Grafton to Britomart.

Inside, things were far from bustling with just seven seats taken close to 8am.

A busy Britomart station and flurry of commuters seemed more promising, those onboard had mixed reactions to the scheme.

“We are going to an appointment today and we decided to catch the ferry and the train, partly ’cause it’s an adventure but also ’cause we heard it was half-price today. So we’re going to have a good day, we’re gonna use the saved money to buy some sushi for lunch.”

Minister for Transport Michael Wood encouraged people to take advantage of the discount. 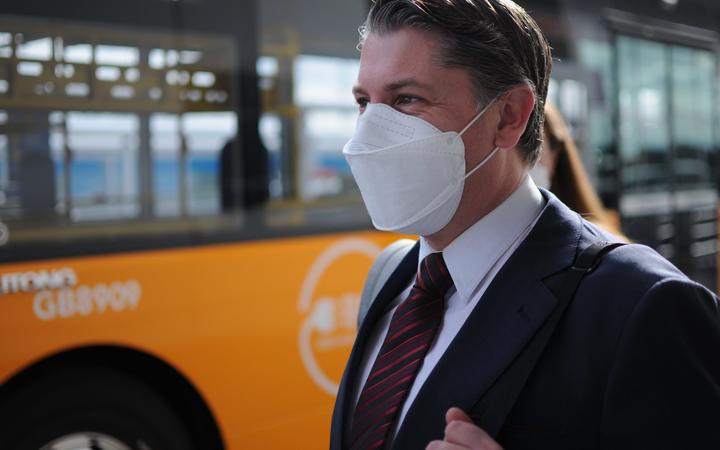 “For an average person who might take two $5 trips per day to go to work and then come home for work, they’re going to save $25 a week as a result of this policy.”

But many were frustrated the scheme was only temporary.

Wood said the government would consider more long-term options – depending on how the trial goes.

“We are open to considering what we do after that, and we’ll consider the options as we go forward.”

The bill for the three-month programme is about $40 million.

It has fuelled calls from some, including from mayoral candidate Efeso Collins, to make all public transport free for good.

Auckland Transport said it would cost about $200m to fund that.

Ferries were included in the discount, but “tourist” destinations like Waiheke and Rangitoto were not because they are run by Fullers 360, not Auckland Transport.

That was upsetting for this local woman and her young family.

“Oh, it would mean a lot, it would make a huge difference, it means we could probably come and visit more often, visit family and yeah, it’s incredibly frustrating. It needs to be a part of the same structure that other transport services are part of, but it’s Fullers that are getting in the way of that.”

Waiheke Local Board Chair Cath Handley said they should have been included.

“We’re the only one of two services of public transport in the country that didn’t get the 50 percent, half-price fare. Now that’s outrageous, it’s outrageous, ’cause our fares are already the most expensive commuting fares in the world.”

Auckland Transport was adamant it was doing all it could.

“All I can say is at the moment we’re having ongoing conversations with Fullers. It is a fully commercially-operated service, it’s really for Fullers to come back with some ideas to us, but we are talking to them,” a spokesperson said.

Māori dying with Covid-19 because of misinformation - health leader

Read More
A woolly merino sheep is feeling much lighter now after four years on the run in the Tekapo hills. Shrekapo the…
FFEATURED

Read More
Police are investigating after a woman was found with a serious gunshot injury last night in New Lynn,…