Big changes will have to be made to future art deco festivals in Hawke’s Bay, after two disruptive years due to Covid-19. 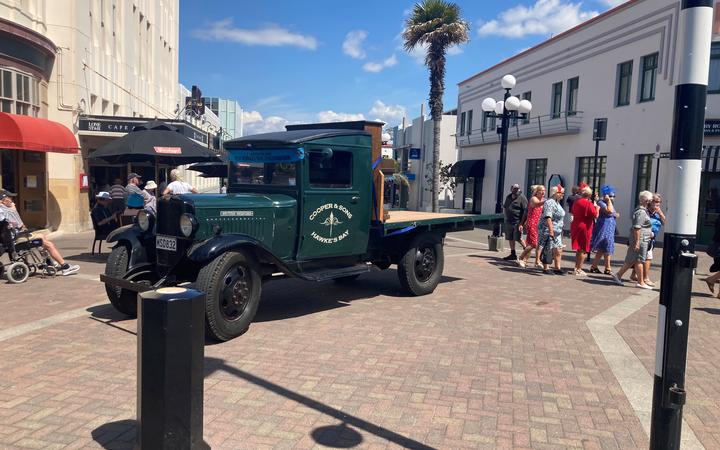 The main streets of Napier were lined with old-fashioned cars during this year’s scaled back Art Deco Festival. Photo: RNZ / Tom Kitchin

Last year’s festival was cancelled, and this year’s was hugely scaled back.

It will stick to promoting and co-ordinating the festival.

The trust is asking hospitality and retail organisations across the region to pitch in instead, by creating their own events.

“The Art Deco Trust, per say, will scale back some events, but it will mean some of our retail and commercial partners will pick up a whole lot of slack,” chairperson Barbara Arnott said.

The trust relies heavily on tourists to come and visit Napier during the year for some of its income, but numbers had significantly dropped, due to border closures.

“Our walks and tours and our educational vending really went to rock bottom, because of no international visitors, so we’ve got to make sure that we’re viable both financially and in terms of supporting the city in the future,” Arnott said.

The trust received government funding through the Strategic Tourism Asset Protection Programme, but that had come to an end.

The trust also pared back the size of its in-house events team, with the festival director losing his job.

More details on how the new model will work will be announced in the coming year.

Read More
Australia|Why Novak Djokovic Was Blocked From Entering Australia The men’s No. 1 tennis player had received an exemption…
FFEATURED