It was “finance day” at the COP26 climate summit which saw a group of huge international banks pledge to use their more than $100 trillion asset base to fund green projects. 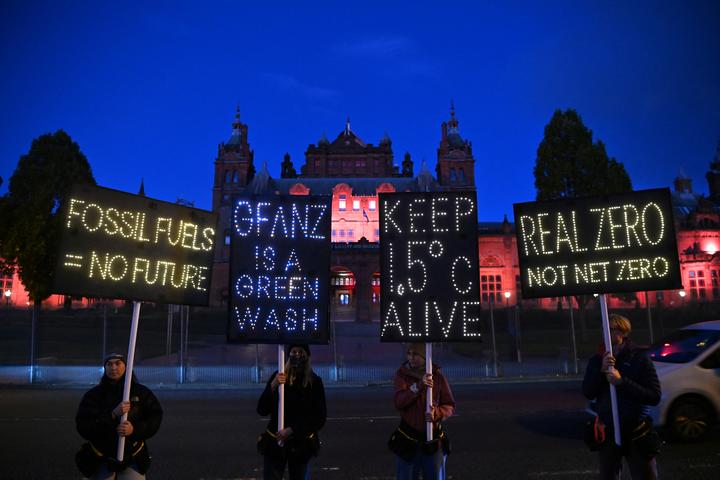 Climate activists hold illuminated signs and a banner protesting against the use of fossil fuels on the sidelines of the COP26 Climate Conference, at Kelvingrove in Glasgow, Scotland Photo: AFP

The noisy and headline hogging leaders have now gone home, leaving negotiators the brutally difficult task of hammering out the details of the Paris pledge to keep the world to 1.5 degrees of warming.

It comes as a new study from the Global Carbon Project shows emissions have rebounded to near pre-pandemic levels off the back of coal and natural gas emissions surging.

RNZ’s Climate Reporter Hamish Cardwell has a wrap up of the most important events of the day at the summit in Glasgow, and some stuff to watch for tomorrow.

$US140 trillion in assets in the tank for climate

A group of some of the largest banks and insurance companies promise to use their more than $100 trillion asset base to fund green projects.

The 450 financial institutions – who collectively control 40 percent of global assets – have also promised to cut their carbon emissions to net-zero by 2030.

However, Oxfam Great Britain chief executive Danny Sriskandarajah told Morning Report it is a good step but it does not prevent banks from investing in fossil fuels.

He said to be effective financial initiatives need to compel banks to only invest in green projects.

Another tricky issue is agreeing on a way of transparently verifying projects actually are are net-zero.

Poland, Vietnam, Chile and other countries will tomorrow pledge to phase out coal-fuelled power generation and stop building new plants, in a deal Britain hopes will commit 190 nations and organisations to quit the fuel.

However, as The Guardian reports, some of the world’s biggest coal-dependent economies, including Australia, China, India and the US were missing from the deal.

Reuters is also reporting that tomorrow more than a dozen countries, including the UK, Denmark, along with the European Investment Bank, will pledge to stop public financing for fossil fuel projects abroad.

The British government, which is leading the effort, was in last-minute talks to sign up more countries.

The countries lined up so far have collectively invested billions of dollars per year in international fossil fuel projects over the last few years.

However, the deal will allow for unspecified exemptions in limited circumstances.

Despite a slew of new commitments a promise from wealthy nations to give developing countries $US100bn a year for climate action has so far failed to fully materialise.

Now looking likely the target won’t be hit until 2023.

The $100bn pledge is far below the needs of vulnerable countries to cope with climate change, but it has become a symbol of trust and fairness between rich and poor nations.

Vulnerable countries will need up to $300bn per year by 2030 for climate adaptation alone, according to the United Nations.

Death of man isolating at home was not vaccine related - Ministry

Read More
Evergrande is just the beginning for China which is in the midst of a financial crisis. The impact…
FFEATURED
4.30am EDT 04:30 The day that was, Wednesday 18 August That is where we will leave the live…
FFEATURED