Covid-19: Iwi swing into action after positive test in Taranaki

Iwi Covid-19 testing stations have tested a quarter of Eltham’s population since a case of the virus in the town was announced on Saturday evening. 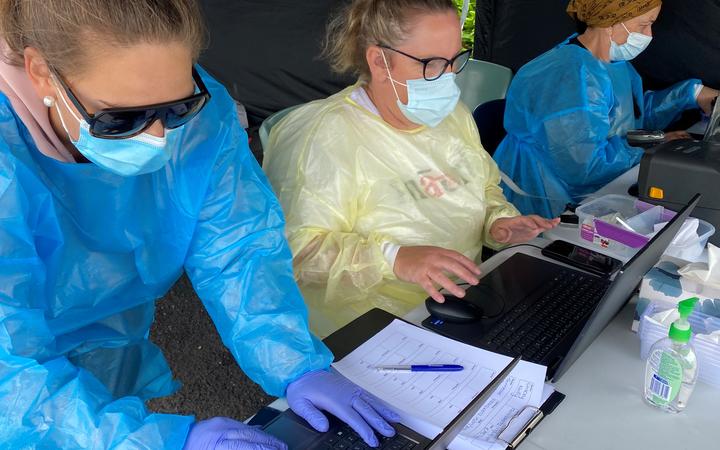 Ngāti Ruanui and Ngāruahine began testing in Eltham on Sunday morning with support from the Taranaki District Health Board (TDHB).

On Monday another 50 and 60 respectively had been tested.

The Eltham case is the eighth in Taranaki in the last fortnight, although four have returned to homes outside the region. Two cases remain in New Plymouth and one in Waitara.

Ngāti Ruanui’s Te Pāti Māori co-leader Debbie Ngarewa-Packer said the iwi had copied the model of Te Whānau o Waipareira and were able to respond “really fast and understand really, really quickly if we have Covid in our community”.

“We’ve had the kōhanga, the people who’ve been at the marae, the marching team, anyone who may in some way have been in group environments.

“The ultimate model is we get to a point where marae can stand up their own response so we can really quickly let our community know what’s going on.”

“Just a flow of people coming through and they’re pretty much all Māori which has been great.

“The good thing is even those who are still thinking about the vaccine are showing up. They are being responsible and it indicates that everybody around here is doing their best to keep themselves and their whānau safe.”

She said a calm, unpanicked mood was notable.

“Everybody knows what they have to do and are just doing it. We’ve kind’ve got to a position where we everyone’s just aware of how this goes.”

Dillon said the only worry was a lack of published locations of interest, which people had come to expect so they could make informed decisions about precautions.

Ngāti Ruanui’s Deputy Tumu Whakaae Ngapari Nui was welcoming the carloads and guiding them through the process. He said kōrero with whānau was part of the testing model.

“That’s what the kaupapa is about, talking to people getting to know who they are and how they feel about this.” 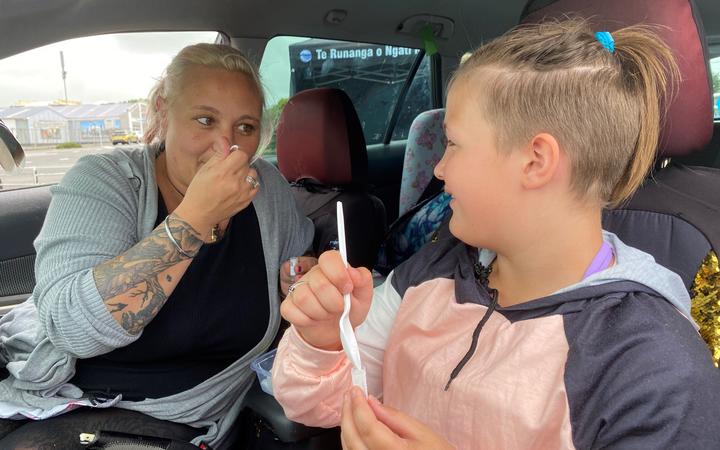 Shay Gillan and her daughter Skye had their saliva tested for Covid-19 in Eltham. Photo: LDR / Craig Ashworth

Tineka Kumeroa has been saliva testing for a month since finishing her first year of nursing studies.

“It helps with my communication skills and I enjoy being hands on helping others while studying, helping our community and whānau.”

Taranaki Māori vaccination rates are now at 84 percent for first doses and 73 percent for second doses. That’s eight percent and 13 percent below the overall rates for the region – but a month ago the difference was 14 percent and 19 percent, so the gap has narrowed significantly.

“We were able to use our disadvantage in the equity issues with TDHB to our advantage, to leverage [better funding and support] and I think what we have now is the minimum norm that every community needs to have.”

She said the pandemic response offered evidence for long-lasting change.

“It’s a real disruptor to how communities can manage without needing to have all the other bureaucracy and centralisation of things done from Wellington.

“I wonder what other immunisations we can do for ourselves … Maybe we can do this with cancer and diabetes and maybe we can use this model in education.”

Māngere sends strong message on light rail: 'This is for us'

Read More
Nelson’s Rotomairewhenua/Blue Lake, which has the clearest water in the world, is facing the threat from lake snow,…
FFEATURED
A nurse works in a COVID-19 patient’s room during a tour of SSM Health St. Anthony Hospital’s intensive…
FFEATURED