The head of the Covid-19 vaccine taskforce in Australia is calling for parents to be persistent when it comes to vaccinating their children, saying if GPs do not have appointments they should try pharmacies. 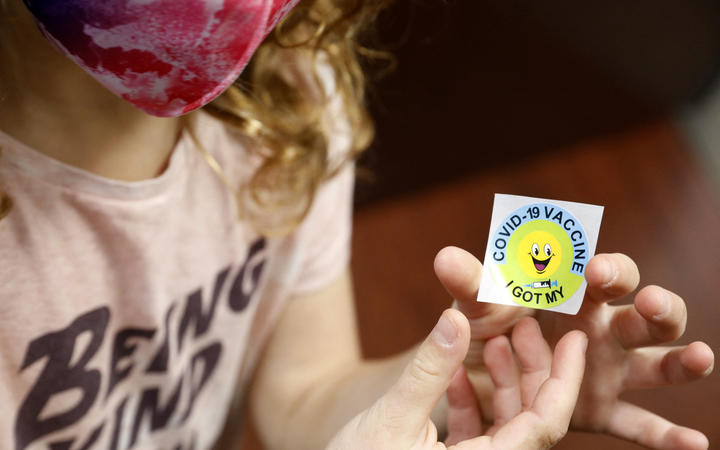 It is the first day that 5-11 year old Australian children have been able to be vaccinated (file picture). Photo: AFP / Jeff Kowalsky

Lieutenant General John Frewen sought to reassure parents on Monday there were more than enough vaccine doses to inoculate all eligible children.

But he acknowledged not all parents had found it easy to book their children in to get their first dose.

“I do want to emphasise again that there is enough paediatric doses in the country to offer every five to 11-year-old a first dose before they commence the school year,” he said.

“I do understand there have been frustrations around getting appointments for some.

“Please, if you can’t get an immediate appointment with your primary healthcare provider, if that is your GP please do try pharmacies, please do try the state hubs.”

Some parents have said their GP appointments have been cancelled, with clinics saying they do not have enough vaccine supply.

One mother, Millie, said she made an appointment with her local GP in Melbourne for her 10-year-old daughter after she was told a previous booking at a pharmacy would be pushed back by a week because of a lack of supply.

“That’s when the alarm bells started to ring,” she said.

“I booked the appointment [at the GP] a while ago and they called over the weekend to say they don’t have the vaccines yet.

“They said they had no visibility of when the doses would be coming but that as soon as they receive them they would reschedule the appointment.

“At the moment if you ring, the next available appointment [at the GP] is February 21.”

Millie said as well as the GP appointment she had also booked into the state-run hub as a “back-up”, but it was now the only option left that would see her daughter vaccinated this week.

Lieutenant General Frewen said there were currently 800,000 doses in the system at chemists, GPs and state-run hubs.

Opposition leader Anthony Albanese said there was “enormous concern” from parents who were struggling to get their children vaccinated.

“There’s a real gap between what Canberra is saying and what people on the ground are experiencing,” he said.

“Parents who are struggling to find an appointment for their children will know that that (supply chain issues being behind the delays) is not the case.”

Other states not expected to delay school start

Ahead of the vaccine rollout opening up to children, Queensland announced its decision to delay the start of the school year by two weeks.

Prime Minister Scott Morrison said he did not think other states and territories would follow suit.

“I don’t expect that necessarily [will be] the case,” he said.

“As you heard already from the New South Wales Premier, the Victorian Premier, the situations in both of those states are fairly similar.”

Chief Medical Officer Paul Kelly said children should return to school, reiterating that “of the different variants we’ve seen, it (Omicron) has been much less severe in children”.

Morrison also described the government’s attitude to the current outbreak as one of “pushing through” instead of going back to lockdowns.

Professor Kelly said the national expert health panel, the AHPPC, had agreed to new rules for non-customer facing grocery and food supply-chain workers, similar to what was already in place in NSW.

Morrison said the proposed changes had been sent to state and territory leaders for their consideration.

Young people are leaving tech because of bad culture

Read More
There are 89 new community cases of Covid-19 in New Zealand today, after this morning’s revelation of two…
CCovid-19

Read More
Another person has escaped from an Auckland MIQ facility, and is a close contact with family members who…