Repairing roads and supporting Gisborne locals with insurance issues will be priorities as the Tairāwhiti region cleans up from the week’s flooding, the prime minister says. 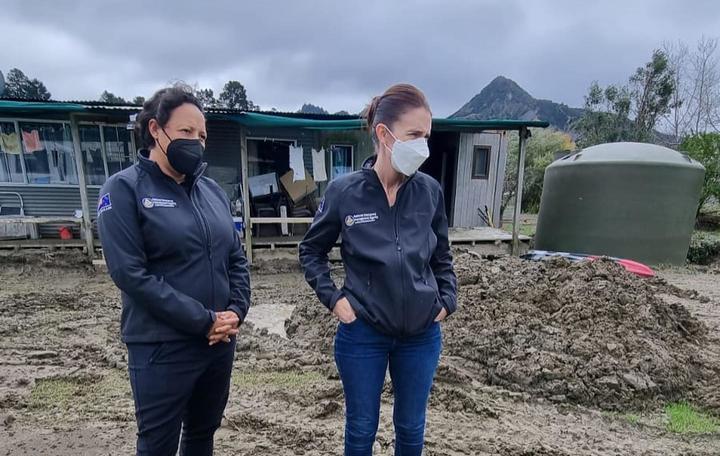 Jacinda Ardern has been talking to locals in Tokomaru Bay this afternoon and looking at some of the worst affected streets and buildings.

In an instagram post, she said this was the second time in less than a year that they had been hit by a severe weather event – “everyone agrees this time it was worse”.

“On top of the pandemic really hitting Tairawhiti right now – it’s extremely tough. Another reason to keep working together as much as we can.”

The government and council will be working closely with the area’s residents, she said.

“It really comes down to what can we do as quickly as we can to support people. In many cases they’re having conversations with EQC and insurers, and unfortunately about seven households have already been in that position before, so we locally, as the local MPs here, can help those families.”

The government has already pledged $175,000 to the cleanup.

Seeing the damage first-hand had been useful, she said.

“We’ve got residents here who have been affected twice now with this significant event and just getting a handle on the work that needs to be done to reinstate housing and key facilities, but also understanding what needs to be done in the long term to try to prevent the kind of damage we’re seeing here again.”

A lot of the roads on the East Coast were vulnerable to slips and flooding, partly because of changes to land use, Ardern said.

The school had been damaged and had a close call with this week’s flooding.

“It’s taken our Totara tree which had been there for 120 years, as a result of that the whole bank has come down which is now .5 of a metre to our fence and basketball court.”

Paranihi was anxiously awaiting a risk analysis from the council, which was needed for the school to reopen.

Meanwhile, Tokomaru Bay hapu representative Lillian Ward said she was brought to tears on the first day of the flooding,

It was good to have the prime minster there today, because the local community have grievances to air, she said.

“Every time there is a weather event there is at least one community on the east coast which is cut off from the community. That’s not good enough – State Highway 35 needs a lot of investment by the government, so people can get to and from the services they need to access.”

State Highway 35 north of Tokomaru Bay remains closed as far as Te Puia Springs, as contractors try to clear debris across the road.

Woman who died in Gisborne named

FFEATURED
Police have confirmed the person arrested after an attack at Tawa College yesterday was a teenager. Photo: RNZ…
FFEATURED

Read More
Parts of the South Island are in for heavy rain and possible severe gales today. Photo: Unsplash /…