Eden Park’s chief executive says he’s confident the stadium will handle big numbers coming to get vaccinated at the weekend. 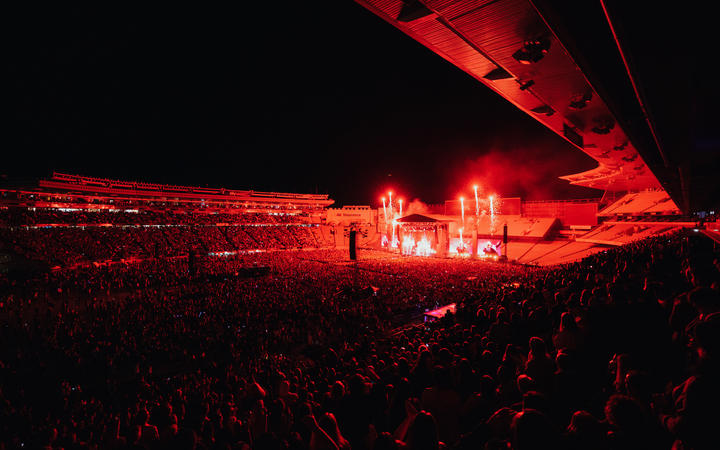 Eden Park will be packed with those wanting to get dotted. Photo: Supplied/Six60

Anyone who gets vaccinated will get their name on the big screen and walk through the iconic rugby players’ tunnel.

The park is aiming to fully vaccinate as many as possible on Saturday and Sunday and will be open from 12-8pm on both days.

Big numbers are expected at Eden Park, but the scrum to get in doesn’t phase him.

“We’ve got the infrastructure with the DHB and heath officials to ensure that safety is imperative,” he said.

“Also as you could imagine Eden Park with the infrastructure is accustomed to holding concerts with 50,000 people or sports event so we’ve got adequate car parking for people, public transport on our door step.”

The initiative was initially driven by Ngatiwai in Harauki Gulf and Eden Park itself, and is also a Māori youth initial for Tamaki Makaurau.

“We do think we can reach that 90 percent milestone and we’ve had a number of businesses and sporting teams get on board,” he said.

“I think this is a once-in-a-lifetime opportunity to get vaccinated on the hallowed turf. “People get the opportunity to walk through the iconic tunnel and through the change rooms. As we all know Eden Park is New Zealand’s National Stadium. It’s the fortress against international teams and we want to make New Zealand a fortress too against Covid-19.”

With 19,000 sq/m of grounds, Sautner was confident of keeping people from lingering too much in the one spot, taking selfies and hanging out with friends.

Queues at the door and traffic wouldn’t be too big an issue either, although the amount of people that would come is hard to tell, he said.

“We have had preciously a Covid testing centre at Eden Park and have accommodated 400 cars at a time. It is a bit of an unknown. We know on Super Saturday there was around 9000 that had got there first dose in Auckland and we are hopeful that many of those come for there second dose.”

Eden Park is one of several hubs being set-up across the country to boost vaccination rates.

Auckland senior secondary students 'missed school' but not rushing back

Read More
It’s another week of no Covid-19 cases – or change in alert levels for the South Island. Organisers…
CCovid-19

Read More
Victoria has recorded 246 new locally acquired cases of Covid-19, as the state government expresses concern over the…