A Wellington family and their Maltese dog called Crash have been waiting three months to get back into their home after fire gutted the house next door.

Their cat, Beauty, has stayed behind, out back in a shelter next to Crash’s singed kennel, and they return each day to feed it. 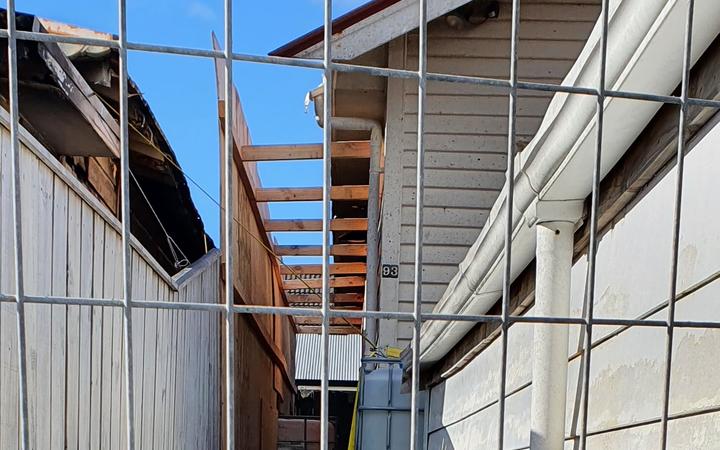 Temporary fencing and ply sheets confront Vanila Ekenasio on daily trips back to her Kilbirnie home to feed the cat, Beauty, who has refused to leave. Photo: RNZ / Phil Pennington

The ruins are suspected to contain asbestos, playing a part in the delays.

National guidelines and landfill rules are being tightened, often making disposal a longer, more costly process than before.

“We want to go home,” said Vanila Ekenasio, who, with her sister and niece, fled their Yule St home, in Kilbirnie, when fire ripped through next door within minutes on a Wednesday morning.

“It’s going on towards the winter and getting cold.”

The family have been living out of suitcases – which they passed through the front window of their home as the front door is boarded up – at a motel near the airport.

“We know other people are a lot worse off than this.

“But in our own little ordeal, it has been a little bit frustrating and stressful.”

Red-and-white signs on a temporary wire fence around the house where the fire broke declare that “asbestos removal in progress”.

But it is not.

While the ashes and ruins under the buckled roof were sprayed down soon after the fire to trap any asbestos, none has been taken away.

Ekenasio wanted to ensure it was 100 percent safe to return.

“My front door is boarded up.

“I have had damage … things inside the house that need to be fixed, but the main concern for us is the asbestos.

“I have health concerns as well. And this needs to go in some sort of order … demolishing the house and removing the asbestos has to happen before all these other things on my property.”

On the day of the fire, the three girls who live next door fled from the rear of their burning home.

Ekenasio’s sister was outside, preparing to go to work, and shouted back inside to get out.

“We actually had to run. It was a bit of an inferno coming behind us from the back of the house.

“We got out just in time. It was my sister that saved us.”

Later, they understood the gutted home next door would be demolished in short order. That did not happen.

Though their insurers had been wonderful, putting them up at the motel, and Crash was able to stay with family close by, the delays were “ridiculous”, Ekenasio said.

The family whose house burned, are staying up the road with relatives.

Initially, they spoke to RNZ about how asbestos removal was contributing to delays, but then declined to talk publicly.

The job is confronted by rising costs and some confusion around asbestos removal.

Wellington City Council tightened its disposal rules last year – it had explained the reasons why to the Yule St house owner, it said.

Its Southern landfill only takes asbestos if it is in a double-lined bag or double-wrapped on a pallet for easy moving with no tipping involved – it cannot just be wet-down in the back of a truck.

In cases such as this, removal companies have been known to consider trucking asbestos waste to landfills with looser rules hundreds of kilometres away.

The asbestos removal company whose name is on a big sign at Yule St, TechClean, declined to comment.

Tighter landfill rules follow on from a WorkSafe code of practice.

“Double bagging is referred to in the [code] and is an accepted industry practice,” WorkSafe said in a statement.

“WorkSafe is encouraged to hear that the process is being widely adopted, as it increases the security of asbestos disposal, and this is in line with mitigating risk.”

Its code says “all” asbestos waste should be put in double bags no bigger than 1.2m across – however, [https://www.worksafe.govt.nz/topic-and-industry/asbestos/where-to-dispose-of-asbestos/

elsewhere] it talks about putting it in double-lined skips, or vehicle trays.

The code instructs to “dispose of asbestos waste as soon as reasonably practicable”.

The spray used at Yule St is a temporary fix only.

The Demolition and Asbestos Association said there may be other reasons contributing to the delays, including confusion about disposal rules.

The code of practice was “unworkable”, it said.

It would not comment further while it undertakes a state-of-the-industry report.

WorkSafe is reviewing the asbestos code – which it said had wide industry consultation back in 2016 – but any changes would not be till next year.

It was too early to say if double bagging would be looked at, though it is checking the code “against current and new processes involved in removal since it was published”, it said.

RNZ spoke to a half dozen households at Yule St. Some wondered why the charred wreck has not been cleared; they expressed sympathy for the families’ frustrations and, while two had concerns about the asbestos, the others were not worried by it.

Some said they got official warnings to shut their doors and windows on the day of the fire, while others did not – but they all had visits from officials afterwards offering asbestos advice.

Ekenasio said officials did air testing back then, which came back clear, and she wanted that repeated.

“There should be follow-up testing prior to us just going back in, to make sure.”

Her steel roof showed signs of heat blasting at the rear, but they were lucky, she said.

“People have used the word miracle … when they’ve gone into my house and seen, actually all fine, not bad at all.”

Nelson doctor before disciplinary committee after affair with married patient

Read More
Wellington City Council is laying out its choices for getting rid of the city’s future rubbish. Photo: 123rf…
FFEATURED

Read More
A national title and cherry-shed trophy is within spitting distance for hopeful contestants in Cromwell. The current world…