A derelict building in Christchurch caught fire for the second time in three years this morning – forcing some to evacuate their homes. 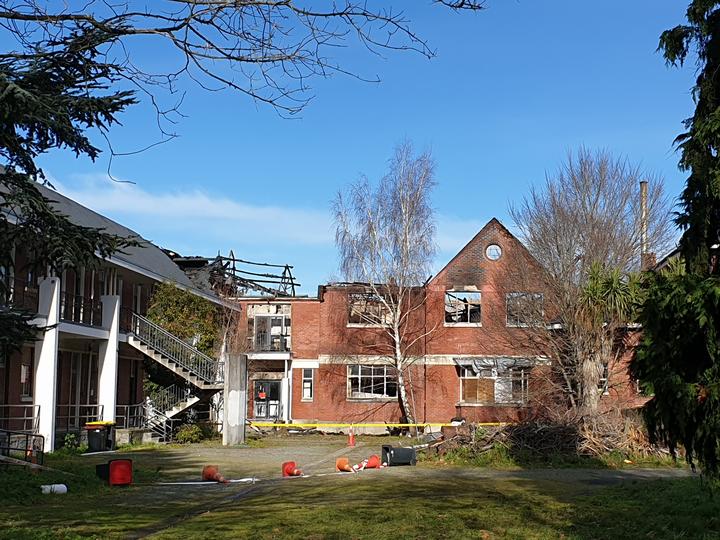 Antonio Hall after a fire in 2019. Photo: RNZ / Nicholas Pointon

The heritage listed Antonio Hall has been left largely abandoned for the past decade, but residents say someone needs to take responsibility for it.

Resident Marlene Hoods was woken up at 3.30am by a firefighter banging on her window, saying she had to get out.

“It went on and on on, banging on my window, and I felt like saying, ‘I’m not deaf!’

Antonio Hall, a heritage-listed building built back in 1904 that has sat abandoned since the 2011 earthquakes, had gone up in flames again.

She and her neighbors were evacuated from their homes until shortly before 7am, when firefighters got the blaze under control.

Crews were still on site today, dampening down hotspots – but after suffering major damage in the 2011 earthquake, it wasn’t safe for them to enter.

“It was what we call a third alarm fire, so we had about eleven appliances, about 40/50 people and one turntable ladder,” he said.

“It was well-involved. It’s a derelict building that’s had a fire about two years ago, it’s just been sitting around.

“We were more concerned about the exposures than the buildings, all the residential properties around it. So, we were covering those and extinguishing the fire at the same time.”

The crumbling building has had a storied life: it’s been a seminary, a private hostel for Canterbury University students and a venue for hire.

It’s now privately owned and has sat largely derelict for the last 10 years.

Local resident Tom Challies said there has been the odd squatter.

“People used to be allowed to go there for photoshoots and stuff like that but apparently, that’s not happening anymore because it’s not safe.

“I guess it’s just, either bring it back to its former glory or make a move. It’s just another stale eyesore in Christchurch that needs to be dealt with.” 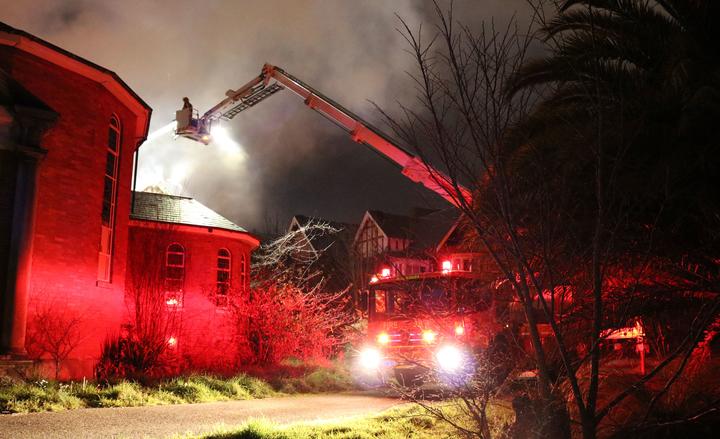 A large blaze at Antonio Hall in 2019. Photo: Supplied / Fire and Emergency

Heritage New Zealand’s area manager for Canterbury and West Coast, Fiona Wykes, said it was a shame to see the building in such a state.

“We’re really, really saddened and disappointed, to be honest, that this has happened again.”

“It’s quite shocking and upsetting for us. The building and grounds have always been a significant landmark on Riccarton Road.

“So, it’s quite a key site around that area.”

The council issued a dangerous building notice after the 2019 fire saw almost a third of the mansion destroyed, but that was lifted after the owners completed work to bring the building back up to standard.

Wykes said it was one of the largest privately owned houses in the city and had huge potential.

“If you look at nearby Deans Bush and places like that, you can see an idea of the sort of site it could potentially be,” she said.

“And there have been various options over the years suggested but sadly, none of them have come to fruition.

“Disappointment has been the the key element in recent years, I think, just seeing it fall into greater disrepair. It’s been really sad”

But Fire and Emergency’s David Berry said more destruction was probably in its future.

“We certainty don’t want anybody around here, it’s pretty unstable with the walls.

“We were talking about demolishing parts of the building to make it safe before we leave.”

Read More
Wedding planners around the country are being hit with massive blows as their busy season begins. Photo: 123rf…
FFEATURED