Heavy rain has eased but the state of emergency remains in place in the Gisborne area after two months’ worth of rain fell in 36 hours, causing widespread flooding. 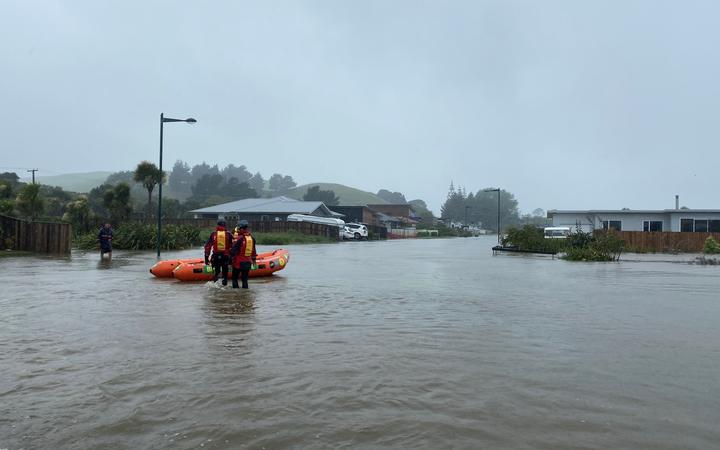 The state of emergency was declared in the area yesterday as heavy rain pounded the region and high tide was due to hit at 6pm.

Several families from the Kaiti and Sponge Bay areas were evacuated and civil defence staff stayed on guard overnight across the Tairāwhiti region.

Inflatable rescue boats were used to help move residents out of from flooded homes.

More rain is forecast, though the heavy rain warning has been lifted and floodwaters were able to drain overnight.

“It’s very, very wet, it’s raining outside. It slowed down a little bit overnight but we’re expecting two more days of rain,” Gisborne Mayor Rehette Stoltz told First Up. “We’ve got a lot of roads damaged, we’ve got a lot of roads and a state highway that are just one lane, but otherwise we’re looking at surface flooding in town at this stage.”

Tolaga Bay community defence officer Greg Shelton said another 25mm of rain fell overnight and there was a lot of wind, but the Hikuwai River level had fallen.

Most of the flooding in the Uawa Tolaga Bay area had dropped but roads were still down to single lane and slips were expected, he said.

“People tend to think when it stops raining that will be the end of an event but from now on that’s when we get a lot of land movement.”

Civil Defence reported few calls overnight and Fire and Emergency in the area did not receive any requests for help.

UPDATE 6:25AM, FRI 5 NOV
Due to a fallen tree, SH35 is now CLOSED between Te Puia Springs and Tokomaru Bay. Please DELAY your journey & avoid this area if possible. ^LZ https://t.co/ZRUrgWLFDv

Covid-19: Updates and developments for 5 November

Read More
The calls for New Zealanders to get vaccinated are becoming more urgent by the day as Covid-19 embeds…
FFEATURED
Melbourne, Australia – “My homelessness is directly related to domestic violence, because I would just up and leave,”…
FFEATURED