Home Greytown’s alcohol-free bar: ‘Everyone was very happy, but without the loudness’
FFEATURED

Greytown’s alcohol-free bar: ‘Everyone was very happy, but without the loudness’

The man who opened an alcohol-free bar in Wairarapa says worldwide the popularity of zero-alcohol drinks has been increasing at an unexpected rate. 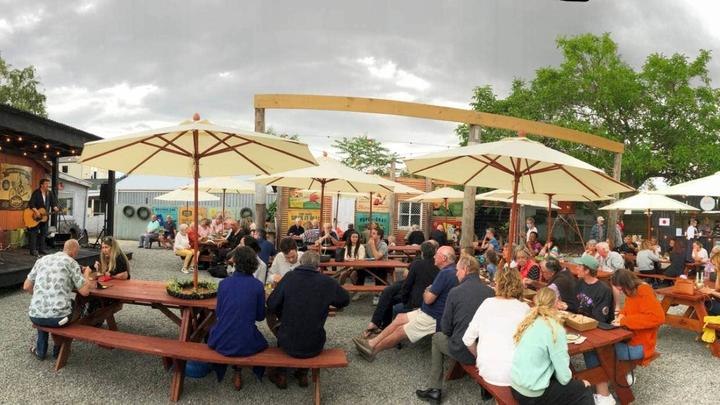 Adam Blackwell’s alcohol-free bar ‘Unleaded’ opened as part of the Greytown Truckstop venue, which is an alcohol-free summer pop-up that aims to provide family dining and entertainment for food trucks, caravans and outdoor events.

Blackwell said it was the Greytown Truckstop that initially gave him the idea for ‘Unleaded’.

“While we were operating it [Truckstop] in the first month I noticed that everyone was having a nice time and everyone was very cheerful and friendly and happy but without the loudness that you usually encounter if you’re at a bar – something about alcohol creates a little bit of loudness.”

Blackwell said he wanted to retain that “warm happy family vibe” while introducing a “drinking experience” that allowed people to have a drink while listening to live music.

He said not everyone thinks an alcohol-free bar is a good idea – but sometimes it’s just because they have not tried it.

“We get the comments like ‘where’s the party if there’s no alcohol?’ and you know ‘how can I enjoy this if it hasn’t got a kick?’

“But once they try it it’s a totally different story and you know we had a guy that gave us a bit of a hard time and he took away one of our alcohol-free beers, came back for another and by the end of the night he’d finished off five and wanted one for the road. So we were pretty happy to convert someone who was pretty anti- to start with.”

Blackwell said the venue allows people to eat, drink, be social and listen to music but without the alcohol “there’s not a sniff of aggression that’s present”.

He said the popularity of alcohol-free drinks is increasing at an unexpected rate.

“It’s partly to do with Covid, it’s partly because people might have overindulged a little bit during Covid and realised that it wasn’t a great choice and … are correcting themselves.”

The Unleaded venue is adults-only and Blackwell said even though the drinks it sells are alcohol-free, they are being marketed in the same way as alcoholic drinks would be.

He said he does not want the alcohol-free drinks to become a “gateway” which introduces children to the idea of alcohol once they are legally able to drink.

“I just don’t think a 10-year-old’s going to like the taste, I mean they taste so much like alcoholic drinks that you know, we know that most kids don’t like those kind of tastes so it’s just not appropriate to give a child a drink they’re not going to like.”

Blackwell said the drinks retail for slightly below what alcoholic drinks would but their production process is quite involved.

“It’s not easy to produce zero-alcohol drinks, so they shouldn’t necessarily be priced too much lower than an alcoholic drink because you know there’s quite a job to make them as good as they are.”

Christchurch locals fed up with Brian Tamaki protests: 'It's been really disruptive'

Read More
A hunt is underway for a registered sex offender who is actively avoiding police in Victoria. A search…
FFEATURED