Mencari has always been a bit sassy, says Hamilton Zoo curator Mark Turner, but as the second oldest captive Sumatran tiger in the world she has every right to be. 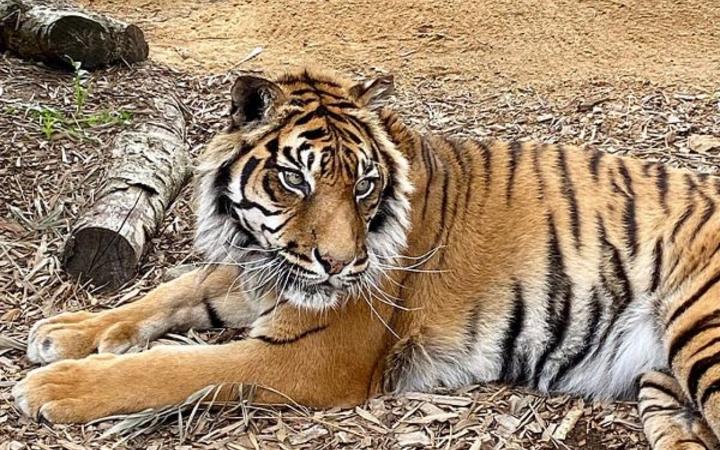 Mencari is one of the oldest residents at Hamilton Zoo and the second oldest captive Sumatran tiger in the world – in the wild, tigers have a life expectancy of 15 years.

Hamilton Zoo’s curator Mark Turner said Mencari got lots of treats and special attention on her big day, “much to her delight and sometimes annoyance”.

Among those treats was a special birthday cake, made with blood and topped with a bit of cream.

Mencari was born at Wellington Zoo, where Turner worked at the time.

“Myself and another keeper then took her with her brother and sister up to Hamilton, because Hamilton never had tigers before and they built this lovely big enclosure and they took all three cats.

“I brought them up here, settled them in and last was kind of like the last I saw of them,” he said.

Just over a year ago, he found himself back at Hamilton Zoo.

“I was very very surprised to see her alive and doing well, especially at the grand old age that she’s at. It was nice to see her still fit and healthy and looking very sprightly for her age.”

Sumatran tigers were really important to the breeding programme run in Australiasia, Turner said, although Mencari was much too old to be involved anymore.

“There’s basically less than 400 surviving, they are critically endangered.”

“It was nice to see her still fit and healthy and looking very sprightly for her age” – Hamilton Zoo curator Mark Turner duration 3′ :57″
from Morning Report
Add to playlistPlaylist
Download

Surfers line up in Westport for national championships