The West Coast of the South Island has seen a surge of interest from players large and small in gold prospecting. 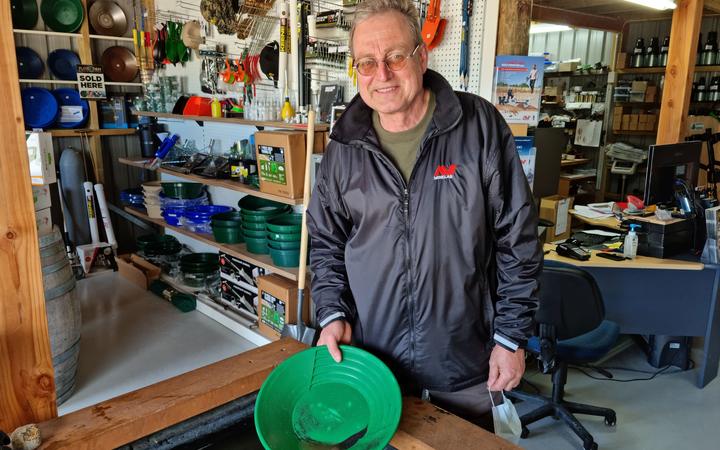 Spurred on by a relatively high gold price, up by nearly 20 percent on the start of last year, and the popularity of Aussie TV shows showing everyday people making it rich, gold fever has taken hold.

“I got infected with that gold fever in the late 80s down in Arrowtown and I tell you it’s even more dangerous than the coronavirus, because you never actually get rid of it, and then the crazy thing is that there is no medication.”

In 2009 he hung up his gold pan and began what started out as a small business selling prospecting equipment out of a small shed.

The business now takes up two large garages on his property from where he sells everything a small player might need to make their fortune, including the latest gadgets such as metal detectors.

Dan Gerber said business had never been better, with increasing numbers trying their hand at the 19 spots approved for recreational gold fossicking, which were all in the South Island and didn’t require a permit.

He said just last weekend a couple of gold fossickers in the Nelson area found a single nugget worth a staggering $15,000.

“During the Gold Rush they were finding buckets full [of gold] in a rather short time. In general those times are gone, but every so often somebody strikes it lucky.”

The larger players were also showing renewed interest, with 108 permits applied for last year and another 57 coming in so far in 2021.

Minerals West Coast manager Patrick Phelps said despite a lockdown, last year saw the amount of gold pulled out of the ground in his region sky rocket by more than 30 percent.

“We have had a level-four lockdown but not for as long as we did last year. Given that the price has been relatively high and given that a lot of people would probably have more established operations than they had the year before, I would predict that production will be higher this year as well, but we’d have to wait for the numbers to come in sometime next year.”

Gold production would hit even higher rates if Australians, Federation Mining went in to full production at Waiuta near Reefton.

“It’s called the Snowy River Project and they are currently putting down tunnels to get to where they think the quartz deposit is that bears the gold. They are predicting about 70,000 ounces a year once they hit full stride.”

That was almost three times the total amount of gold produced on the coast last year.

Peter Haddock, who ran an engineering company producing the screens used in gold mining, said there was still plenty of gold, mostly around the areas first targeted in the gold rush of the 1800’s.

“The gold will come up with the movement of the mountains when they were formed and the river systems and glaciers cart that gold down the river. So there’s a mile [wide] strip basically, apart from the beaches, where the gold is quite enriched, from Reefton right through to Franz Josef.”

Peter Haddock said, given the millions of dollars in potential export earnings, the ban on new mining in the Conservation estate needed another look, especially given the low impact gold mining had, compared to the likes of coal mining.

Indian New Zealanders amongst the most highly-vaccinated in the country

Read More
The police are investigating a serious assault in the Christchurch suburb of Sydenham this morning. An injured man…
FFEATURED

Read More
Police are seeking witnesses to a robbery at Wellington’s Waitangi Park last Sunday, where a 16-year-old was hit…