Home How do we respond to the global shortage of rapid antigen tests?
CCovid-19

How do we respond to the global shortage of rapid antigen tests?

As Omicron has spread globally rapid antigen tests are in short supply – here’s what some countries have done. 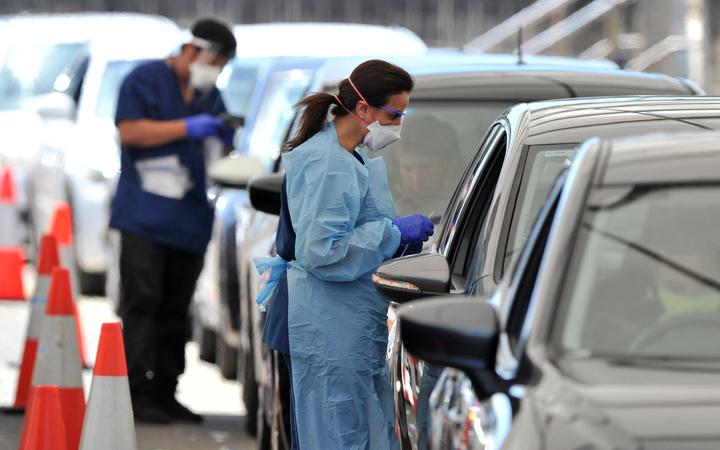 Testing sites in NSW are struggling to keep up with the demand for testing as Omicron infections soar. Queues at a drive-through testing site, Bondi Beach, Sydney. Photo: AFP

Australians’ fondness for queuing has been tested over the past few weeks, as hundreds of thousands seeking Covid-19 results waited for hours in the summer heat, in lines that snaked around city blocks.

But the RATs have been in short supply, with supermarket and pharmacy shelves emptied, or only briefly stocked with pricey tests, some sold individually in ziplock bags.

Late last year, a collective of businesses were given the green light to import more than 300,000 RAT kits into New Zealand, the New Zealand government announced RATs would be made available to some groups from mid-December, and pharmacies quickly reported they were swamped by demand. On Thursday, University of Melbourne epidemiologist professor Tony Blakely warned New Zealand should urgently stock up on RATs, and take other urgent measures while Omicron was at still at the country’s door.

This week, Australia’s national cabinet agreed to a plan to get more rapid tests to those who need them and ease the pressure on PCR testing clinics. But for now, Aussie warehouses are bare and waiting times are still sky high.

There have been shortages in other countries, too.

Just days before Christmas, US President Joe Biden scrambled to order 500 million rapid tests, but stocks are so low there it’s likely to be weeks before they’re available.

In Canada, some states have been mailing kits to members of the public, but Ontario won’t have enough to start sending them out again until late January at the earliest. 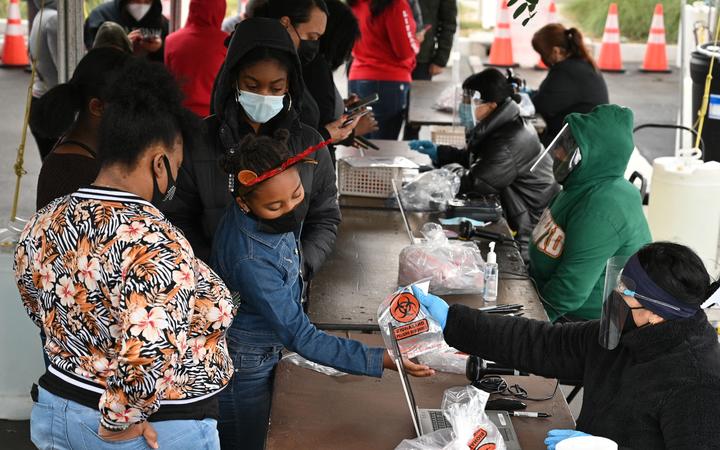 A girl is given a self-testing kit for Covid-19 at a screening centre at the Martin Luther King Jr Medical Centre in south Los Angeles, California, on 27 December. Photo: AFP

In parts of Europe, health authorities have been warning since the beginning of December that RATs were in short supply, with long queues forming outside rapid testing sites across Italy and retail prices for the kits steadily climbing in Germany and France.

The UK, too, was beset by a lack of tests over the festive period, with many people unable to place their orders for free packs of lateral flow tests from the National Health Service before the new year.

Wales has loaned England a few million to bridge the gap in more populous areas, but pharmacies have warned the shortage is still a huge problem, with daily cases in the hundreds of thousands.

How did the world run out of Covid-19 tests?

The places experiencing the most difficulty all seemingly have one thing in common: a spike in Omicron cases over Christmas.

“And we haven’t globally figured out what the next stage is in how we manage coronavirus in the community.”

Of course, it wasn’t just those with symptoms clamouring to spit into a tube. The spike in cases coincided with a healthy dose of unsymptomatic folks who needed proof they were Covid-19-free in order to travel during the festive season.

Big businesses had also been quick to order tests in bulk to ensure their workers could test regularly and continue showing up to work. Sporting teams, private schools and universities did the same.

This put considerable pressure on testing systems. Providers of RAT tests were overrun while the healthcare staff carrying out PCR tests and analysing results in pathology labs couldn’t keep up with demand, stretching out wait times and creating significant backlogs.

Put simply, Omicron and holiday travel prompted a worldwide increase in demand for tests, and the supply chain wasn’t quite ready.

Read more about the Omicron variant:

The Omicron variant, what you need to know

Omicron may be less severe in some, but not mild – WHO

Omicron spreads like wildfire, but major differences in global responses

Head of the peak testing body Pathology Technology Australia, Dean Whiting, said shelves there were full to the brim with rapid tests in November, and most weren’t moving that quickly.

Some states were slower than others to jump on board and make rapid tests available for retail sale after they were approved for at-home use by the Therapeutic Goods Administration – Western Australia remains a hold-out, with a ban set to be lifted some time this month.

“It was only three or four weeks ago that governments… started to indicate that these tests had a role and to articulate what that role was. Up until then, we had no proper buying signals from any of the authorities,” Whiting said. 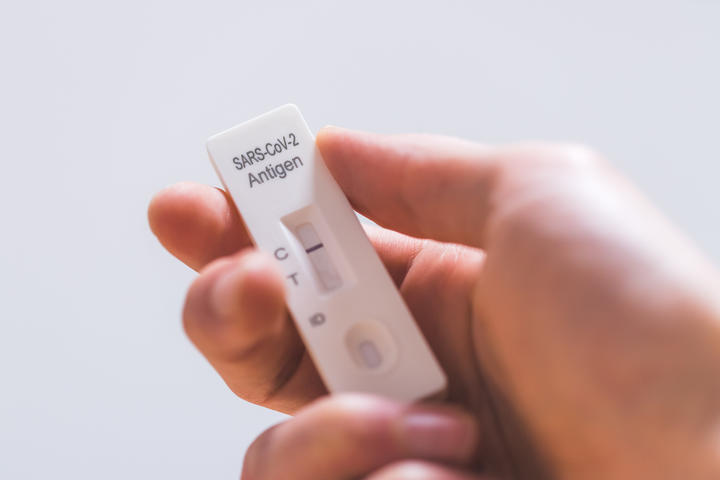 As Australia’s Omicron wave began to accelerate in mid-December, the industry was caught by surprise – “so much so that by about Boxing Day… almost all the shelves had been cleared”.

Whiting said retailers scrambled to pull the little stock they had in warehouses out to their stores, but it hasn’t been enough.

“Demand far outstrips supply at the moment, there’s no doubt about that.”

“I’ve spoken to members about resupplying … they have got orders in their systems for tens of millions of these tests. But they will take four to six weeks to come through.”

Supply chain issuesWhile there appear to be plenty of the testing strips and plastic casings that make up most rapid tests, some manufacturers are struggling to get their hands on another piece of the raw materials puzzle.

There have been reports that some retailers were intentionally hoarding stock to inflate demand and justify price gouging, but Whiting said there were genuine supply chain issues at play.

Supplies of cardboard and packaging materials have been dwindling since October.

But for Australia, chief among these supply chain issues is the scarcity of air freight.

The vast majority of rapid tests being sold for use in Australia are being imported from overseas, which means an overnight emergency delivery to replenish stocks is near-impossible.

Airlines around the world scrounging for healthy crews have been cancelling thousands of flights since Christmas, and cargo data providers reported prices on key routes almost doubled in the last three months of 2021.

“So there are huge supply chain issues … that then becomes quite a meaningful part of the contribution to the cost of the goods,” Whiting said.

With experts warning that Omicron won’t be the last Covid-19 variant, it seems testing will continue to be an important factor in managing future outbreaks.

In an open letter published in the British Medical Journal this week, public health experts called for a “vaccines-plus” approach that incorporates not just vaccination, but face masks, ventilation, and set criteria around effective testing, tracing and isolation to suppress transmission.

“This strategy will slow the emergence of new variants and ensure they exist in a low transmission background where they can be controlled by effective public health measures, while allowing everyone (including those clinically vulnerable) to go about their lives more freely,” the letter said.

Australia has relaxed recommendations on who needs to get tested, abandoning confirmatory PCR tests for those who return positive RAT results. Most states are directing only those with symptoms or who are close contacts to line up for a PCR.

Deakin University’s professor Bennett said in future, testing should be focused on the places where a diagnosis is most important.

“In my view, we’re running out of rapid antigen tests because we’re not clear about when it should be used, when it’s the most useful, when it makes a difference,” she said.

“When you have really high infection rates in the community, particularly in summer, if you have symptoms, you more than likely have Covid-19.

“If a positive test is going to change your management, you need to get tested. If you’re someone who’s vulnerable, who might still be at risk of severe illness… you need a definitive diagnosis so they can put you on monoclonal antibodies or antivirals.”

But for others, she said a positive test wouldn’t change much.

Professor Bennett said removing some of that load from the testing system would alleviate waiting times for PCR results and mean rapid antigen tests could be saved for high-risk settings such as healthcare, aged care and schools. 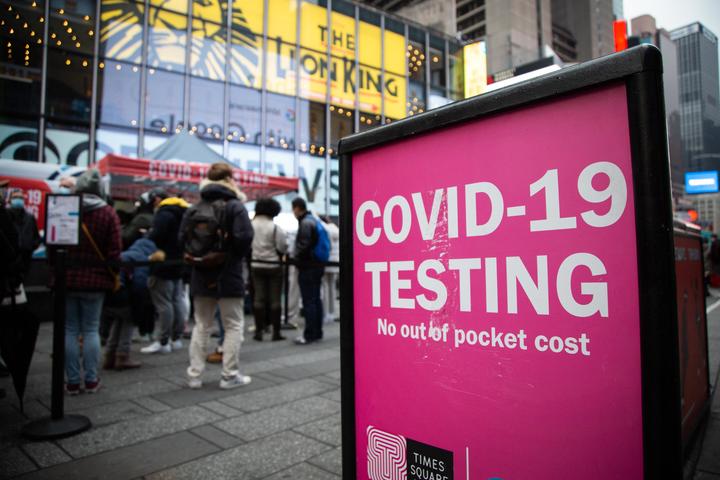 Epidemiologist Mary-Louise McLaws, who advises the World Health Organization on Covid-19 infection prevention and control, said we should not dial back on testing.

“Without testing people, officially … we will never know what the true level of infection is in Australia,” she said.

“From the World Health Organization’s perspective, testing is the only method of understanding how well your outbreak management approaches are having an impact on the control.

“It also helps to identify demographic trends and identify early on the age of the person who’s most at risk, for example. So, there is no reason why you would stop testing.”

She said Australia needed to “learn from our neighbours” about how best to use rapid tests to help manage future outbreaks.

Professor McLaws said Singapore had set a “fantastic example” in preparing for new variants and equipping residents with rapid antigen tests ahead of time.

Similar to the UK’s model, the government sent free tests to all residential addresses nationwide in August. Anyone required to self-test receives a text from the health ministry to let them know and can collect more rapid tests from street vending machines by scanning ID cards. 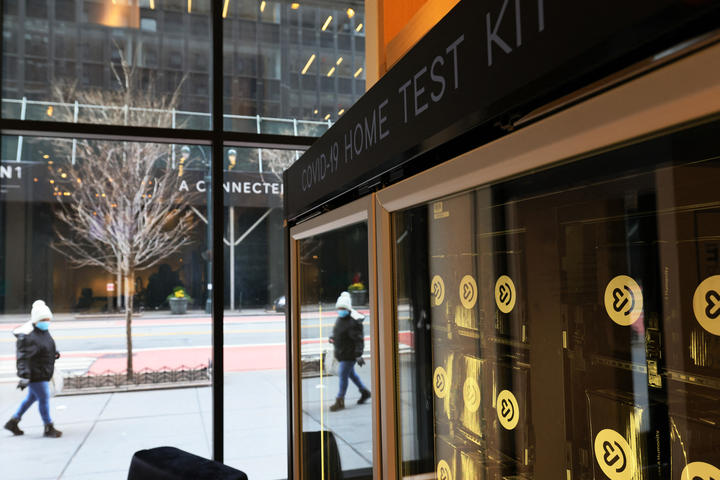 In Thailand, the government implemented price controls on rapid tests last August to prevent gouging early on – a measure the Australian regulators have turned their attention to this week.

Part of the White House’s plan to solve the RAT drought is boosting local manufacturing of rapid tests, reducing the US reliance on foreign-made tests that get caught up in supply chain issues.

However, ramping up local production is unlikely to address the immediate need for more tests.

There are already several Australian manufacturers making rapid tests, but given the Therapeutic Goods Administration’s approval for at-home use didn’t arrive until late 2021, most of those currently in production have already been snapped up by overseas markets.

Short of winding back the clock, Professor McLaws said Australia should be looking to technological solutions to make existing testing and tracing measures more efficient.

With the change in requirements for PCR testing, she said it’s crucial governments find a way to capture rapid test results so health authorities can get an accurate picture of the infection rate.

Private enterprise has been throwing out all sorts of solutions during the pandemic, from websites to help people find stores with rapid tests in stock, to virtual queuing apps offering a socially distanced alternative to the tedious and transmission-prone experience of standing in line to get tested at PCR clinics.

Professor McLaws thinks governments will need to adopt more of these ideas going forward, such as a new tracing app built by US mathematician Po-Shen Loh that uses game theory to help people mitigate their own risk before they’re even exposed to a positive case.

Read More
A small Waikato community is waiting anxiously for hundreds of Covid-19 test results to come back today. A…
CCovid-19