All residents and visitors evacuated from Kaimaumau as a precaution this afternoon due to a scrub fire have now returned home. 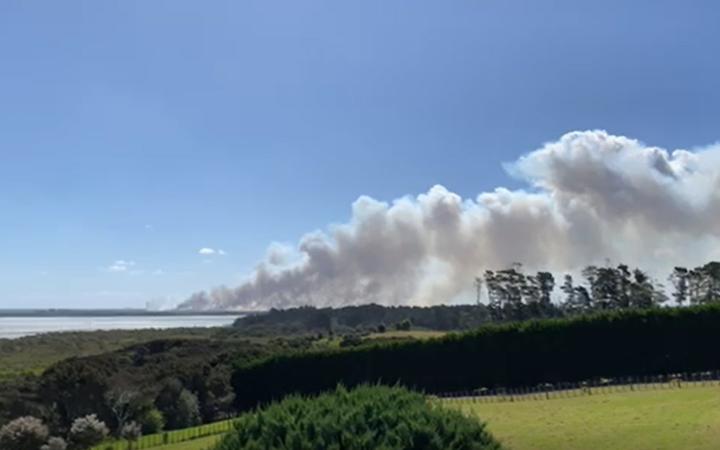 Smoke could be seen billowing from the fire on the day it was reported, at Kaimaumau, north of Kaitāia. Photo: SUPPLIED

Firefighters have been battling the blaze for about 15 days, but it flared up again in the past 24 hours.

The fire is burning within a perimeter of more than 31 kilometres.

NZ Fire and Emergency incident controller John Sutton said a strengthening northerly wind from the sea pushed the fire across a containment line near the beach close to Kaimaumau village early this afternoon.

As a result, an emergency mobile alert was sent to residents asking them to evacuate to Waiharara immediately.

It was the second time in two weeks locals had had to relocate while fire crews, supported by helicopters and heavy machinery tackled the breakout and widened firebreaks.

The blaze on the wetland was first reported on 18 December, and has since burned through 2300 hectares of bush, scrub, swamp and dune vegetation.

Sutton urged locals and visitors alike to stay off the beach between Kaimaumau and Houhora for the next few days, and to keep well away from the fireground.

It is feared the fire will have damaged sacred iwi sites, and could have decimated rare flora and fauna in the wetlands.

Fire crews will continue to monitor the blaze overnight.

Surf lifeguards must be fully vaccinated from today

FFEATURED
Investors may want to hit the buy button the next time technology stocks sell off. Invesco’s Kristina Hooper…
FFEATURED

Read More
by Jeff Foust — October 13, 2021 The Australian rover will be part of a NASA commercial lunar…