A stalwart of the Counties-Manukau community and former police officer Alf Filipaina says when he found out he was getting a new year honour he immediately thought of his mother. 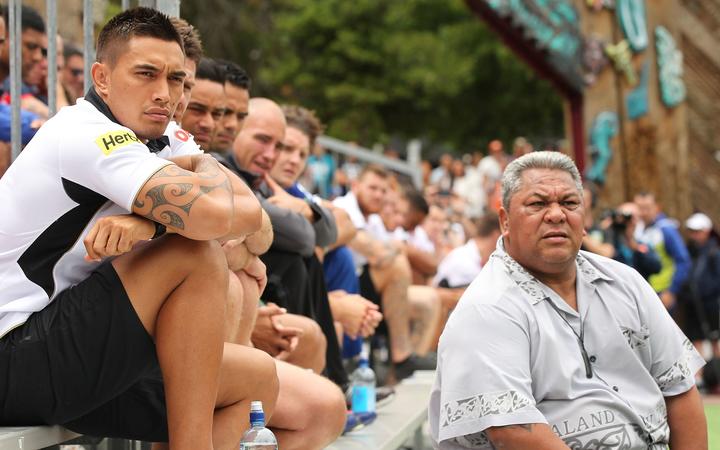 Alf Filipaina, right, who has been involved in rugby league for many years attends a match in Auckland in 2014. Photo: Getty Images

He said he was in disbelief when he found out he was being made a Member of the New Zealand Order of Merit and shed a few tears.

Filipaina was a police officer from 1978 until 2016. He has been involved in local politics since 2003 when he was elected to the Manukau City Council and then in 2010 to the Auckland Council, the first Pacific councillor elected to the super city council.

Minister of Pacific Peoples Aupito William Sio described him as a tireless champion for everyone in South Auckland.

“I am very proud of the calibre and tireless advocacy of our Pacific honours recipients. I congratulate all the Pacific people who have shared in these New Year’s Honours and their families for their support and sacrifice over the years,” Sio said.

Filipaina has been a continued advocate for the people of Counties-Manukau and said while the area may get negative publicity, it is a wonderful place that should not be judged so harshly.

More recently, he has spoken out about the hardship many in South Auckland have faced during the Covid-19 lockdown and continued pandemic.

Filipaina became the first Pacific liaison officer with the New Zealand police in 2000, building a positive rapport with the Pacific community in the Counties Manukau police district, allowing him to resolve many issues in the community.

He co-created the Counties Manukau Pacific wardens and brought together the individual groups by establishing the Auckland Regional Pacific Wardens in 2010.

He was appointed co-chair of Te Tiriti o Waitangi Komiti in 2007.

When he was elected to the newly formed Auckland Council he was the first Māori/Pacific Councillor for the Manukau Ward. Following the 2010 super city amalgamation, he played a key role in the development of the Auckland Unitary Plan, chairing the committee from 2013 to 2016.

He was appointed deputy chairperson of the Environment and Communities Committee in 2016.

Read More
Cabinet is exploring a second phase evacuation from Afghanistan, and the effects resettlement would have on New Zealand.…
FFEATURED
If the Covid pandemic has proven any axiom, it’s that an ounce of prevention is worth a pound…