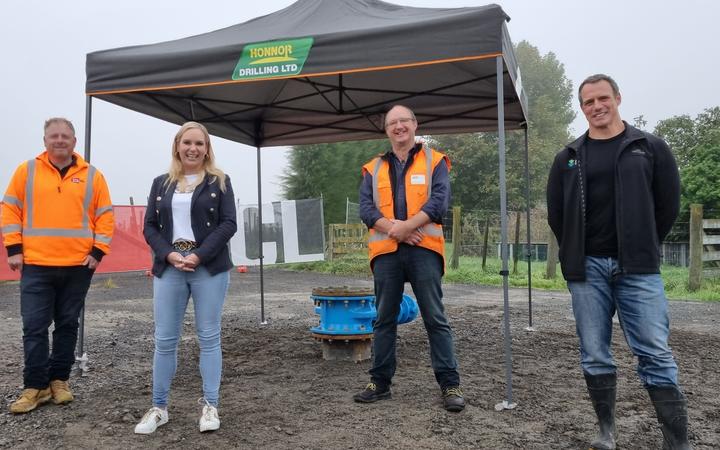 One was blessed today and should be operational by June.

The chlorine has been reacting with manganese underground, creating discoloured water.

It has been bad for Pirimai resident Maree.

“I have [had] dirty water probably the last couple of years,” she said.

“I usually notice it first in the toilet, when you flush it you can tell it’s not clear water … then it’s when I wash my hands… it’s in the bathroom and then it’s in the kitchen and the laundry as well.”

Although the brown water has only come out of the taps twice this year for Maree, last year it was happening once a week.

Dirty water complaints have been on the rise in Napier over recent months.

In July last year, the council got only four complaints – by December that rose to 66 and by January it was 98.

Last month, there were 55 complaints.

The council has said that during the warmer months they add extra bores to the system and many of them have manganese – and this might have caused the jump in complaints.

But still, the less manganese the better. Mayor Kirsten Wise assured RNZ the new bore, in Awatoto, did not have too much.

“We just received our final tests back yesterday, confirming it’s definitely low in manganese, which of course has been what’s caused the discoloured water issues we’ve been having.”

Although she could not promise perfection, she was sure these bores would be better for the city.

There might be the odd bit of brown water when the pipes were being cleaned, for instance.

“You may have the very occasional sort of discoloured water issues when you’re doing something like that,” she said.

“But certainly the high volume of issues that we’ve had over recent years, which has been directly linked to the manganese and chlorination reaction, those will be a thing of the past with these new bores.”

There is still a bit of mahi to go, such as installing the treatment plant, but today was about the blessing, the karakia.

“This morning, we had Chad Tareha, who is the chair of our Ngā Mānukanuka O Te Iwi committee, come and bless the two new bore sites for us. So [it was] really special in terms of actually just ensuring that right from day one they’ve been appropriately blessed and endorsed.”

AJ Macdonald who is the operations manager for Honnor Drilling helped the council with the project.

He said finding a bore without manganese was all about finding what underground layers there were, preferably one with little trace of the mineral.

“In a nutshell, it depends what it’s coming through, where that layer was, where it was put down many, many thousands of years ago and just for us now it’s about tapping into that clean layer.”