Covid-19 testing programmes in NSW are straining under a backlog of soaring demand, with the state government urging people not to get tested unless required, to take pressure of pathology labs. 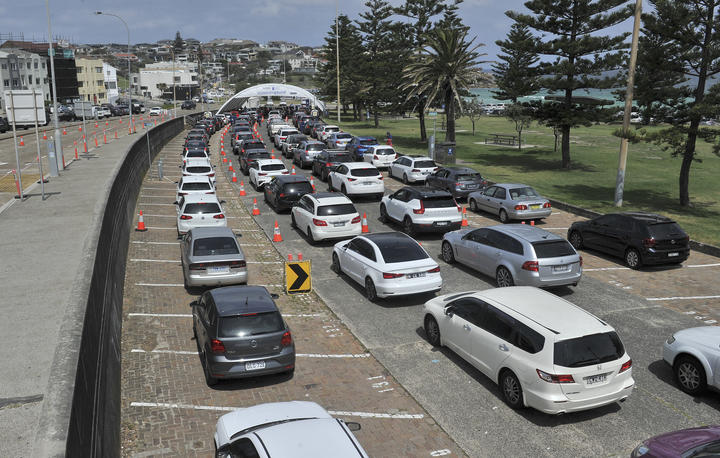 A queue for Covid-19 testing at Bondi Beach, Sydney, as Covid-19 cases keep on the rising across the state. Photo: AFP

The state yesterday recorded a new peak of 6394 new Covid-19 cases despite a 36 percent drop in tests on Christmas Day.

In the 24 hours to 8pm last night, hospitalisations jumped to 458, up from 388 in the previous reporting period.

The number of patients in ICU remains the same as a day earlier, at 52.

The latest cases are the highest daily Covid-19 figures recorded in any Australian jurisdiction.

NSW Health Minister Brad Hazzard said every person in NSW would likely contract the Omicron strain of the virus.

He said the majority of the people in intensive care were unvaccinated.

“Bottom line here is that we would expect that pretty well everybody in New South Wales at some point will get Omicron,” Hazzard said.

“If we’re all going to get Omicron, the best way to face it is when we have full vaccination including our booster.

In a dramatic shift from the first 20 months of the pandemic, the state government has called for shorter queues at testing clinics.

Both Hazzard and NSW Premier Dominic Perrottet said the PCR testing, to see if a person is infected with Covid-19, were putting “substantial pressure on the system”, and many of those swabs were being taken unnecessarily.

He said many PCR tests were also being taken as part of interstate travel requirements, which contributed to the backlog.

“We [need to] get those tests done as quickly as possible,” Perrottet said.

“The faster the queues, the more people will attend who are feeling unwell, and in addition to that the faster we can get the tests back so we can keep our community safe”.

Cases in the rest of Australia

There are 374 people in hospital, of whom 77 are in intensive care, with 43 on a ventilator. Another 38 people are in ICU, but their infections are no longer considered active.

Seven patients are in hospital with Covid-19 symptoms, with none in intensive care.

Queensland’s Chief Health Officer says in total the state has recorded 5,032 cases during the pandemic with more than half of those recorded since 13 December, when borders opened.

Tasmania has recorded a new daily case record for the state, with 44 new cases.

One person is in hospital, 33 people are in medi-hotels, 86 are receiving treatment at home, and no-one with the virus is in ICU.

Yesterday, 142 new cases of the virus were recorded – a new record for the territory.

As of 24 December, 98.5 per cent of Canberrans aged 12 and over are fully vaccinated.

In NSW mask mandates returned on Friday, with face coverings now compulsory in all indoor non-residential settings, including for hospitality staff and in offices, unless eating or drinking.

The state yesterday reached a significant vaccine milestone after it reached a 95 percent single-dose target for those aged 16 years and over.

The double-dose rate for those over 16 in NSW is currently sitting at 93.5 percent.

Tasmania and the Australian Capital Territory are the only Australian jurisdictions so far to achieve 95 percent double-dose coverage.

There were no deaths recorded in NSW in this reporting period.

Read More
There were 65 community cases of Covid-19 today, as the government and health providers prepared for Super Saturday’s…
CCovid-19

Read More
The Covid-19 Vaccine Independent Safety Monitoring Board believes a woman’s death may have been caused by myocarditis, a…
CCovid-19