NSW has once again sustained its deadliest day of the Covid-19 pandemic so far, with 29 deaths and 63,018 infections in the latest reporting period. 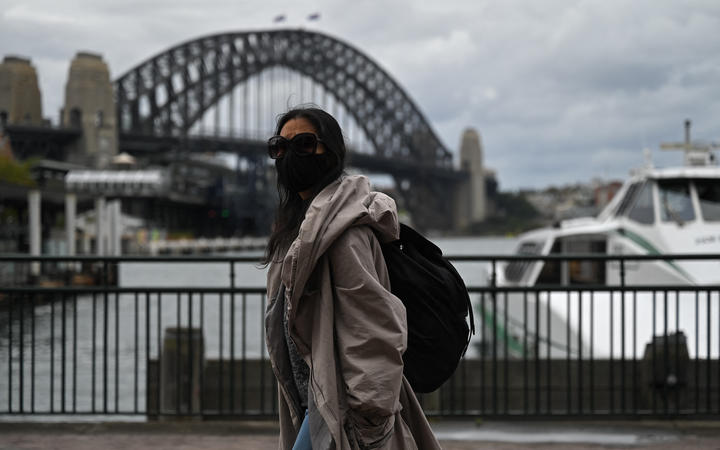 A woman walks past the Sydney Harbour Bridge after stay-at-home orders were lifted across NSW. Photo: AFP / 2021 Anadolu Agency

NSW Health says 24,329 of the positive RATs were “from the previous seven days”.

However, they were all logged in the 24 hours to 8pm yesterday.

It also advised some cases included in daily tallies were people who reported positive RATs on multiple days or had a positive PCR test during the same reporting period.

Failure to report results will soon attract a $1,000 fine but the state government said it would give the community a one-week grace period before penalties came into effect on 19 January.

Customer Service Minister Victor Dominello conceded those health orders would be “very hard to police” and were ultimately about encouraging people to register their results faster.

The latest figures come after NSW Health issued a notice to Hillsong demanding the megachurch immediately cease singing and dancing at its youth camp near Newcastle.

“While the order does not apply to religious services, it does apply to major recreation facilities and this event is clearly in breach of both the spirit and intent of the order,” Health Minister Brad Hazzard said.

It came after an outcry from music and entertainment industry figures lamenting the cancellation of live music events due to the latest outbreak.

The orders banned singing and dancing, and mandated mask wearing, for crowds at events held at hospitality venues and recreational facilities.

In a statement Hillsong claimed its event, which has drawn hundreds of teenagers, had not breached the rules and was “not similar to a music festival in any way”.

NSW Police said it was liaising with Hillsong to ensure the camp complied with health orders after NSW Health deemed its location to be a “major recreational facility”.

Victoria’s Covid-19 hospitalisations have risen to 976, as the state records 18 deaths.

Of those in hospital, there are 112 patients in intensive care, 30 of whom are on ventilators.

Authorities have said the vast majority of those in intensive care are unvaccinated.

The government has highlighted the number of critically ill patients is lower than previous waves, but the sheer volume of Omicron cases is putting dangerous pressure on the healthcare system.

ABC understands the government is preparing to use vacant hotels that have been part of the state’s quarantine program to house patients, in an effort to ease some of the pressure on hospital wards.

There are now at least 239,396 active cases in the state, a day after the government announced Victorian teachers, truck drivers and other essential workers would be able to attend work, even if they are a household contact of a positive case.

The death toll of the current outbreak has risen to 835.

The state’s overwhelmed testing network is currently unable to give a true indication of the number of new cases in the community, but recorded 34,836 new infections.

Victorians who are eligible for their third vaccine dose are being urged to book it immediately in a bid to slow transmission of the Omicron variant.

About 21 percent of Victorian adults have received three doses of a vaccine so far.

Read More
There are 138 border workers employed by private firms who have missed the deadline to be vaccinated. Photo:…
CCovid-19