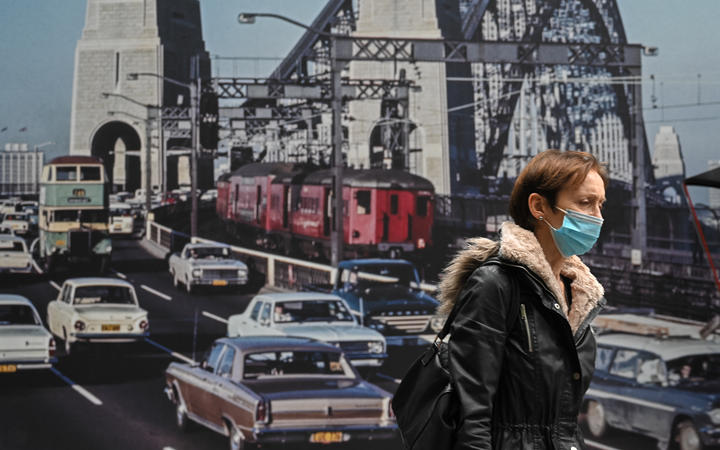 A woman wearing a mask walks past an image of the Sydney Harbour Bridge. Photo: AFP

That makes it the deadliest day of the pandemic in the state on record.

A total of 61,387 rapid antigen (RAT) tests were logged after the government’s new reporting system went live at 9am.

About 50,000 of those were recorded in the past seven days, but included in the latest reporting period.

A total of 30,877 positive PCR tests were recorded in the 24 hours to 8pm yesterday.

Customer Service Minister Victor Dominello this morning, however, said 82,000 positive RAT results were uploaded to the ServiceNSW app since 1 January.

“We expected a high number given we’ve provided for people to put in their data from the 1st of January,” he told Sunrise.

“The critical part of RAT is to get that data to health and what we want to do is make sure we identify and give healthcare to those most in need.

“Over 99 percent that get Covid will have mild symptoms and can be treated at home.

“But there will be that 1 per cent that require additional healthcare and if we get that information to health, than we can keep people safer.”

Failure to report results will soon attract a $1,000 fine but the state government yesterday said it would give the community a one-week grace period before penalties came into effect on January 19.

Dominello conceded this morning the health order would be difficult to enforce.

“The reality is that it’s primarily a signal that we take this seriously,” he said.

“We really want people to register their RAT tests so that way they can access healthcare faster if it’s required.”

Hospitalisations rose to 2,383 and the number of people in ICU is 182.

NSW Health says 21.6 percent of people in the state have had Covid-19 booster shots.

The number of Covid-19 patients in Victorian hospitals has risen to a new record high of 953, as the state reports a further 25 deaths of people with the virus.

Of those in hospital, 111 patients are in ICU, 29 of whom were on ventilators.

There are more than 221,726 active Covid-19 cases in Victoria, causing significant disruption to essential industries and sending the number of available workers in the healthcare system to dangerous lows.

The state has recorded a further 37,169 cases of the virus, but the figure is less than the true number of new infections due to an overwhelmed testing system.

The state government is urging all Victorians who are eligible for a third vaccine dose to seek one immediately through state hubs, GP clinics or pharmacies in order to curb the wave of Omicron infections.

About 20 percent of Victorian adults have received three doses of a vaccine.

The latest deaths take the toll from the current outbreak to 817, and the overall Covid-19 deaths in Victoria since the pandemic began to 1,639.

Read More
Here is all the information you need to stay up to date with the latest Covid-19 case numbers,…
CCovid-19

Read More
Essential workers commuting across Auckland’s border will be asked to get regular tests from tomorrow, while there are…