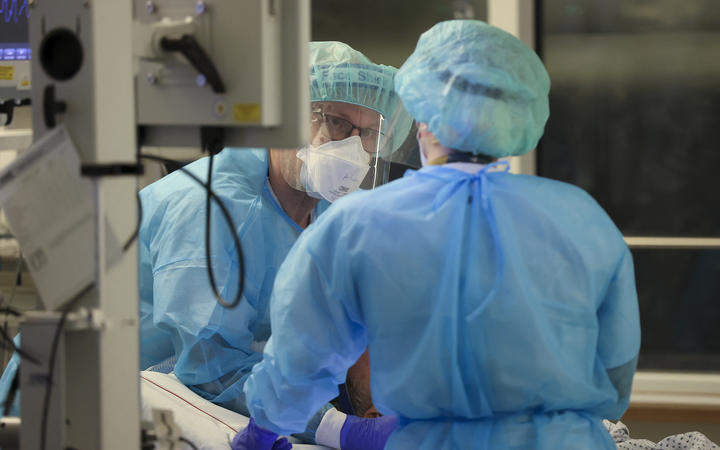 The UK Health Security Agency says its early findings are “encouraging” but the variant could still lead to large numbers of people in hospital.

The health secretary said it was “too early” to determine “next steps”.

The study also shows the jab’s ability to stop people catching Omicron starts to wane 10 weeks after a booster dose.

Protection against severe disease is likely to be far more robust.

The report comes hot on the heels of data from South Africa, Denmark, England and Scotland which all pointed to reduced severity.

The latest analysis is based on all cases of Omicron and Delta in the UK since the beginning of November, including 132 people admitted to hospital with the variant. There have also been 14 deaths in people within 28 days of catching Omicron.

However, a milder virus could still put pressure on hospitals because it spreads so fast.

The issue remains that any benefit of a milder virus could be wiped out by large numbers of people catching Omicron. The UK has set another daily Covid record with 119,789 confirmed cases. There were a further 147 deaths within 28 days of a positive test.

There is also uncertainty about what will happen when Omicron reaches older age groups because most of those catching it and going into hospital so far have been under the age of 40.

But he warned: “Cases of the variant continue to rise at an extraordinary rate – already surpassing the record daily number in the pandemic. Hospital admissions are increasing, and we cannot risk the NHS being overwhelmed.”

The government has announced it will not be introducing any new restrictions in England before Christmas but measures could still be introduced if case numbers continue to grow.

Dr Jenny Harries, the chief executive of the UKHSA, said: “Our latest analysis shows an encouraging early signal that people who contract the Omicron variant may be at a relatively lower risk of hospitalisation than those who contract other variants.

“Cases are currently very high in the UK, and even a relatively low proportion requiring hospitalisation could result in a significant number of people becoming seriously ill.”

Omicron is thought to be milder due to a combination of our immunity and changes to the virus itself.

The variant is mostly infecting people who have been infected with other variants before or who have been vaccinated. Both give the immune system a head start.

However, laboratory studies have also shown changes in how Omicron infects our bodies. It is better at infecting our airways rather than the deep tissues of the lungs – this could make it easier for the variant to spread, but milder as it is further away from the delicate parts of the lungs.

Prof Ravi Gupta, who performed those studies at the University of Cambridge, told the BBC: “The clinical data on reduced severity fit with lab data suggesting Omicron has shifted its preference.

There are also signs that the effect of booster doses is waning.

Two doses of a vaccine were shown to offer limited protection against catching Omicron, which was then restored with a booster dose.

However, the report says this protection drops by between 15 percent and 25 percent after 10 weeks. This is still better than having no booster dose and the protection against severe disease or death is likely to be even greater.

There are no suggestions that a fourth dose will be rolled out in the UK anytime soon and there will be discussions over whether to wait for an update vaccine.