New Zealanders are being urged to avoid non-essential travel to Sri Lanka as the country’s crisis deepens. 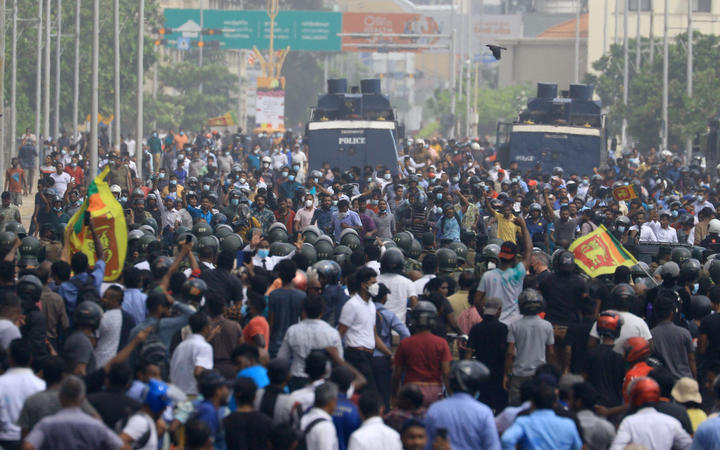 On Tuesday the Sri Lankan government ordered troops to open fire on anyone looting and deployed the armed forces to patrol the streets as anti-government protests continue.

This comes after months of protests over the country’s economic crisis which has left people unable to get hold of essential food and fuel.

In New Zealand those with a links to Sri Lanka are watching on nervously at where the country is headed next.

Athula Wanasinghe, who moved to New Zealand from Sri Lanka 25 years ago, returned from a visit to Sri Lanka on Tuesday just as violent clashes broke out at protest sites.

People were desperate and incredibly frustrated at government mismanagement which had led to power cuts, strikes, shortages of almost all goods, and constant queues to get the few items available, he said.

“Milk powder being sold on the basis of teaspoons. So you can imagine, the grocer opens up a packet and sells it teaspoon by teaspoon to the people.”

Wanasinghe travelled to Sri Lanka because his mother was unwell, but her surgery was cancelled due to power cuts, strikes by medical workers and lack of medical supplies.

In Sri Lanka, Mahinda Rajapaksa resigned as prime minister but demonstrators want his brother, the president, Gotabaya Rajapaksa to go as well.

Information minister until the government collapsed, Nalaka Godahewa, said Sri Lanka was in a state of mob rule.

“Some groups of people were targeting the houses of government MPs, ministers, and politicians. That was happening in every district, every electorate. “

Sanjana Hattotuwa, who has been in New Zealand since 2018, said all of the people he was in touch with in Sri Lanka were clear they wanted the Rajapaksa family, which holds many key political roles, to stand aside.

“It is a very simple thing. These are the architects of our country’s cataclysmic failure. Its not hyperbole. They have literally bankrupted the country.”

Even his elderly mother has said she would be out there protesting if not for her dodgy knees, he said.

Hattotuwa said the violence in recent days was sparked by pro-Rajapaksa mobs brutally attacking people who have been peacefully protesting for several months.

Government supporters and police clash outside the president’s office in Colombo on 9 May 2022. Photo: AFP

The association has opened a bank account for anyone who would like to donate, and they planned to hold more fundraising events in the future, Nanayakkara said.

No violence could bring Sri Lanka closer to solving its political and economic problems, and New Zealand encouraged all to work for a peaceful, democratic and just solution, she said.

There are 68 New Zealanders registered as currently being in Sri Lanka.

This afternoon, the Ministry of Foreign Affairs and trade updated its advice, and warned people to avoid any non-essential travel to Sri Lanka.

It recommended that any New Zealanders in Sri Lanka should avoid protests, demonstrations, rallies and large crowds as they had the potential to turn violent with little warning.

Sri Lanka’s president urged citizens on Wednesday to reject what he called attempts to foment racial and religious disharmony, as clashes broke out in many areas over the government’s handling of a devastating economic crisis.

Eight people have been killed in violent street protests this week.

But even the resignation of President Gotabaya Rajapaksa’s elder brother as prime minister and a curfew have failed to defuse public anger.

“This is the time for all Sri Lankans to join hands as one, to overcome the economic, social and political challenges,” Rajapaksa said on Twitter.

“I urge all Sri Lankans to reject the subversive attempts to push you towards racial and religious disharmony. Promoting moderation, toleration and coexistence is vital.”

It was not immediately clear what prompted the president’s warning.

But there is a long and bloody history of ethnic tension in Sri Lanka, where Sinhalese Buddhists contribute the bulk of a population of 22 million that includes Muslim, Hindu and Christian minorities.

Sri Lankans blame the Rajapaksa dynasty for the economic meltdown that has left reserves of only about US$50 million, stalling most imports and bringing massive shortages of food, fuel, medicine and other essential items.

Analysts say the president can be impeached if he refuses to step down, though the opposition, which has rejected his calls for a unity government, lacks the necessary two-thirds majority in parliament.

No president has ever been successfully impeached and removed from office in Sri Lanka.

Rajapaksa and his brother Mahinda, who resigned as prime minister on Monday, held key government positions when a 26-year civil war ended in 2009 after security forces overcame militants from the minority Tamil community.

Read More
An attempt will be made today to lift the 50-tonne locomotive that fell into Picton Harbour on Wednesday.…