Rubbish bins throughout Nelson’s central city will be replaced with solar-compacting bins, after a successful trial that found they need to be emptied half as often. 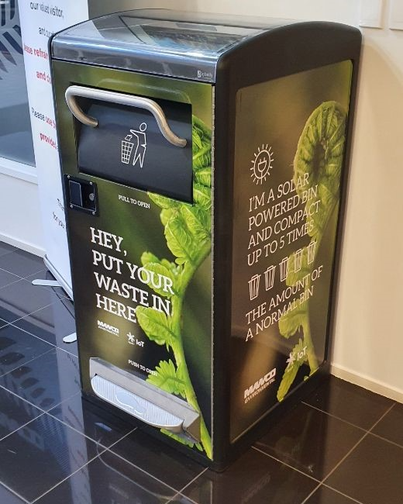 The trial was a joint initiative between Nelson City Council and Spark New Zealand. The bins have a small solar-powered compactor which crushes the rubbish, allowing it to hold more than a standard bin.

It has estimated the annual number of central city bin empties will decrease from 49,000 to 22,000.

“The aim here is to reduce vehicle use and emissions, but also on another level, it’s about reducing unnecessary work for our drivers, especially out of hours.”

They have a drawer opening which is pulled open via a handle or foot pedal, making them rodent and seagull-proof.

The bins will be paid for from council’s Solid Waste closed account, which is self-funded through sources such as landfill waste levies.

Spark New Zealand’s Internet of Things (IoT) sensors installed in the bins determine the volume of material inside and feed real-time information to the council’s waste management contractors, who receive an alert when the bins are full and require emptying.

“The simple change from old city bins to IoT connected smart bins means our city councils will have more visibility and control of their infrastructure.

“In this instance, instead of rubbish trucks driving around the city for hours checking if bins are full, they will now be alerted when to go to and empty the bin at a rate which is 50 percent less than it was before. This is another example of an IoT solution that improves productivity and efficiency, whilst addressing sustainability.”

Read More
National is calling for a new strategy as New Zealand prepares for a wave of Omicron cases, including…
FFEATURED