The Stocker family were supposed to be enjoying their new home by now but are still, along with others, at loggerheads with ECan over wastewater consent related to nitrate risk in Ashburton’s north-east. 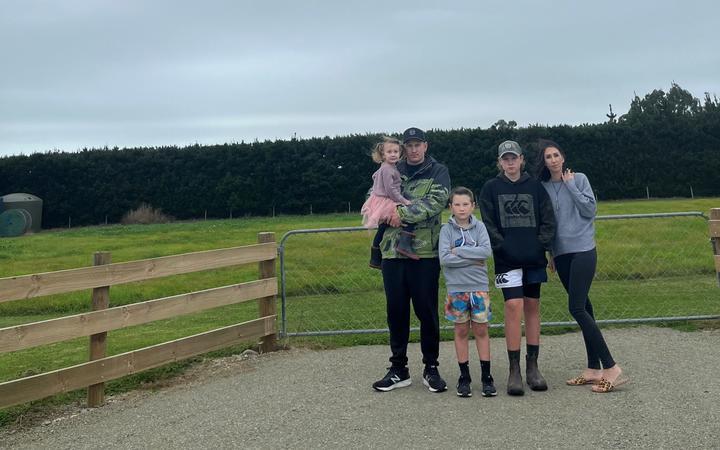 The Stockers – Poppy, Brad, Robbie, Dean, and Ellie, stand at the entrance to where their home would be by now, if not for an ongoing hold up around wastewater consents. Photo: Supplied

Ellie Stocker is supposed to be in her ultimate new home.

Instead, she’s stuck in a nightmare, watching money go down the drain over wastewater consent issues, while the cost to build continues to increase.

Frustrated is an understatement for Stocker, her husband and three children.

They’re one of a group of prospective homeowners and developers stuck in consent limbo with Environment Canterbury’s (ECan) new position on septic tanks in north-east Ashburton.

It’s there that eight applications, totalling around 30 homes, in an area near the airport, has hit the proverbial brick wall.

Due to a risk of increased nitrates, which could impact on safe drinking water standards, ECan now isn’t approving consent for septic tanks in the area, but will approve holding tanks.

ECan consents planning manager Aurora Grant said the change was needed because it centred on “the importance of protecting groundwater for all that use it – including neighbouring properties with drinking water wells”.

It was a rule change that blindsided Stocker and other applicants.

Those applicants included Christchurch firm Kingan Property Investments, who were behind the Stocker’s new home development.

“We had everything ready to go for November, hoping we would get titles,” Stocker said.

“But ECan changed everything officially in December and then shut down for three weeks.

“We were blindsided, and so was the developer.”

Instead of enjoying their new home, Stocker said she was suffering “sleepless nights spent worrying” about when and if they would be able to build their dream home.

The Stockers bought the property in June last year and sold their home in preparation for the build.

They received finance, had designs drawn up, and started planning for life in their new home.

That dream slowly faded into a recurring nightmare.

Months passed and everything remained on hold as the developer struggled to gain approval for wastewater discharge, in order to issue the titles.

“The family from the block in front of us messaged to say they no longer had finance and had to pull out of the land because lending rules were changing rapidly,” said Stocker, whose family have been forced to find a rental to live in while the saga played out.

“I started to get scared.”

Christmas came and went, their finances expiring for a second time.

Meanwhile, she said ECan’s office had shut down “leaving us completely in the dark and the worry turned into anger”.

Kingan Investments had no previous troubles with other sections in the area but hit a consent wall when “ECan shifted the goalposts”, Stocker said.

“The [Ashburton District] council, the developer, and we, all weren’t aware,” she said.

Then they found that they weren’t alone with the consent issue, with a mix of developers and individual property owners also impacted.

Stocker said they had all been receiving requests for more information on the consent applications. But in supplying the information, all they were getting was just more questions and not a lot of answers.

It took a meeting between ECan representatives and the applicants at the end of February to finally clear up the issue.

Stocker was told ECan can’t do septic tanks due to the nitrate risks, without a long drawn out and expensive consent notification process.

The applicants can do a permitted activity, through the council not ECan, with a blackwater (toilet) holding tank and a greywater tank that gets treated and discharged.

It’s a solution, “not an ideal one”, that provides some hope, she said.

They were now taking the path of least resistance and opting for the blackwater storage tank.

But Stocker said they still have no timeline on when that would get approval.

A septic tank needs emptying only every 18 months.

Once approved, there was also the issue with sourcing and installing a blackwater system, which could take six months, she said.

They considered cutting their losses and looking to buy elsewhere but were “now priced out of the market if we can’t move forward with our country dream”.

“I feel guilty for uprooting my family,” Stocker said.

“I feel sad that it might never happen. I feel stressed all the time. I feel angry that it’s taken this long for a straight answer.”

They have some direction now, but Stocker said she wouldn’t let herself get excited “until we have pegs in the ground.”

Read More
By Cass Mason of Newsroom Mikhail Khimich was one of New Zealand’s wealthiest and most high-profile part-time residents,…