Research by a University of Otago PhD student has found huhu grubs (Prionoplus reticularis larvae) have a higher percentage of protein than beef and lamb. 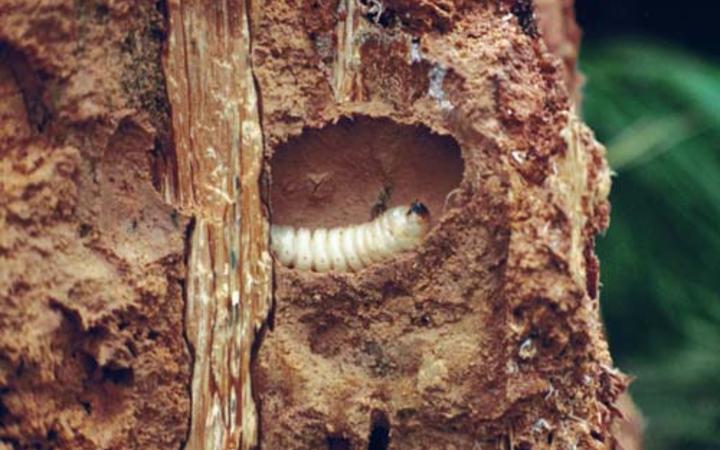 New research has found it would be possible for a 60kg person to meet their daily protein requirements by eating about 75 huhu grubs. Photo: DOC

Food science PhD student Ruchita Rao Kavle set out to analyse the nutritional value of the native New Zealand grubs, which have traditionally been known for their high fat content.

Rao Kavle’s research backed up that claim, but it was the high levels of protein across all four stages of the grubs’ development that really stood out to her.

“We also found that the grubs were rich in essential minerals which all play vital roles in human health and nutrition, the most abundant being manganese, magnesium, phosphorus, iron, copper, and zinc.”

Huhu grubs are not commercially available in New Zealand but Rao Kavle said her research showed it would be possible for a 60kg person to meet their daily protein requirements by eating 170g of them – or about 75 grubs.

To gain the equivalent amount of protein, the same person would need to eat 230g of beef.

“Compared to beef, a smaller amount of huhu needs to be consumed, but some people would find eating 75 grubs off-putting,” she admitted.

Rao Kavle’s study supervisor and co-author, Dr Dominic Agyei, said the research, which was recently published in the International Journal of Food Science and Technology, highlighted the nutritional value of the traditional food source through scientific evidence.

“A focus on indigenous foods, particularly their unique nutritional and health properties, and alternative proteins is surging,” he said.

Wild huhu grubs which were harvested from a pine-forested site in Dunedin were used in the study and while it was found they were nutritious and safe for consumption, the study’s authors recommended they be eaten in moderation.

‘Screams, like a bomb’: Tsunami warning for Australia as Tonga hit

Read More
A frontline border worker sacked because she refused the Covid-19 vaccine was not unjustifiably dismissed, the Employment Relations…