Home Tackling lockdown locks: ‘There’s a lot of hair on the floor’
FFEATURED

Tackling lockdown locks: ‘There’s a lot of hair on the floor’

Auckland hairdressers and barbers are among the first businesses in the country to trial the new Covid-19 vaccination passes today before the rest of Aotearoa joins in next Friday.

At Gentry salon in Commercial Bay it had already been a busy morning.

Quinn was patiently waiting for his turn.

“Oh it’s gonna be bloody great; be a nice change to get my hair cut again. They opened up the link at whatever time it was and I was ready to go and jumped on.”

Owner Adrian was juggling answering calls from desperate customers, scanning vaccine passports and getting through all his appointments.

While he was happy to be back he told Checkpoint  the restrictions and bookings were slowing things down.

He said months of growth meant more time in the chair.

“We’re using every every tool available in our kit today and yeah, there’s a lot of hair on the floor.”

There was about a month’s wait for all of their barbers, not leaving any time to ease into picking up the tools again.

“It does put a bit of pressure on you, you know to perform … we’ve been ready for it, but yeah, that first one was a bit rusty this morning.”

But for others the booking system was not working.

Shahraza Juanmiry owns The Ultimate Barber Style in Parnell – it was not the first day back he imagined.

“We’ve been locked down and since the morning we did maybe 25 haircuts, something like that.”

Sahraza said they were reliant on walk-ins and usually did families but with no vaccine passes for children under 12 they were having to turn people away under the current restrictions.

Up the road at ASC Salon things were far busier, chairs and basins were full again.

Co-owner Andrea has been overwhelmed by calls with just three days’ notice. 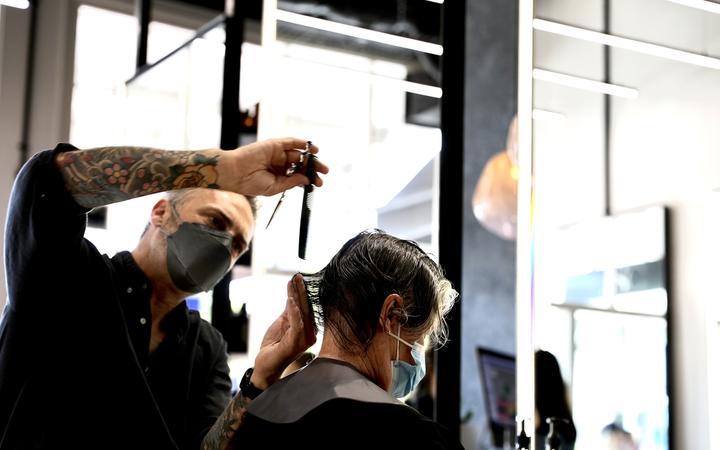 Hair salons were back in action today in Auckland, with cuts getting underway at ASC Salon in Parnell. Photo: RNZ / Marika Khabazi

Clients need to come by themselves to appointments and the salon can only use half its space so that the one metre distance is kept. Staff were also spreading appointments further out than usual.

“So we are putting a little buffer in between each appointment so that we don’t have that crossover if we can possibly help it.

“If our stylists are running behind time… then we’ll simply call the client that’s next or due to come and advise them, and they’ll just push back until such time and there’s a seamless crossover.”

For them the biggest reward has been seeing familiar faces and their smiles when they have got their usual hairdo back at last.

Read More
A Tāmaki Makaurau businessman is gathering support for a no-vax, no-entry policy at bars, cafés and restaurants. Hospitality…